The site on which today’s Stade Jean-Bouin has been used to host football matches and sporting events for the city of Angers since at least 1912. T

he first iteration of the ground was named Stade Bessonneau after the local industrialist and deputy mayor of the Maine-et-Loire  who was instrumental in the stadium’s creation, with the first grandstand appearing in 1925.

Renamed the Municipal Stadium in 1957, the stadium peaked with a capacity of 21,000 in the late 1980s, although the official record attendance was set on 26th April 1969.

A record which is unlikely to ever be beaten, Stade Jean-Bouin’s capacity was scaled down in the 1990s to 17,000 after Angers SCO earned promotion to Ligue 1 in 1993.

As part of the club’s participation in the top flight of French football, the stadium was forced to undergo renovation work in order to comply with more rigorous safety regulations.

The most recent renovation work which has occurred at Jean Bouin stadium came during the 2010/2011 season when a  new 5,400 capacity stand was built where the hill previously sat.

Designed to resemble the opposite St Leonard Tribune, other minor changes were also made such as the removal of perimeter fencing and the installation of an improved security camera system.

Stade Jean-Bouin has hosted one European game to date between SCO Angers and Dynamo Berlin.

The club qualified for the UEFA Cup during the 1972/1973 season after a 4th placed finish in the league but were subsequently knocked out in the opening round 3-2 on aggregate.

Below is a seating plan of Angers's Stade Raymond Kopa: 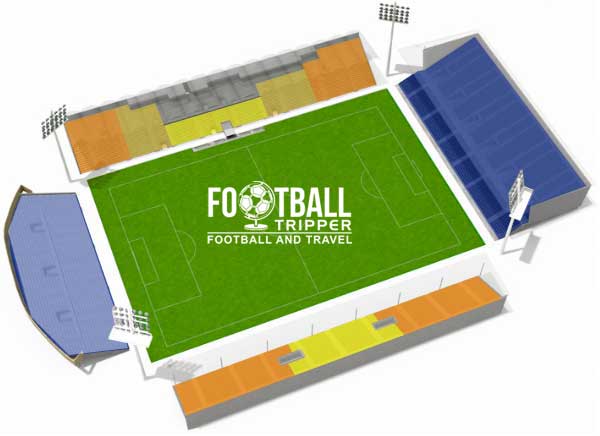 How to get to Stade Raymond Kopa

Where is Stade Raymond Kopa?

Who plays at Stade Raymond Kopa?

What is the capacity of Stade Raymond Kopa?

As of 2023 Stade Raymond Kopa has an official seating capacity of 18,752 for Football matches.

When was Stade Raymond Kopa opened?

What is the postcode for Stade Raymond Kopa?

The postcode for Stade Raymond Kopa is 49000.

Covid Restrictions may be in place when you visit Stade Raymond Kopa in 2023. Please visit the official website of Angers for full information on changes due to the Coronavirus.