Stade Francis Le Basser is a multi-purpose sports venue located in the north-western city of Laval, Mayenne, which is approximately 300km north-west of Paris. Recently renovated in 2002, the 18,739 capacity stadium is home to lower league side Stade Lavallois.

Stade Francis Le Basser as we know it today first opened in 1971, however the site on which it sits has been used to host football matches since at least 1902 when Stade Lavallois were formed. Originally known as “Champ de Croix” (Cross Field),  the stadium’s name was changed in 1930 to Stade Jean-Yvinec in tribute to the local born player who sadly died at the age of 26. It was later renamed to Stade Francis-Le-Basser in 1971 who was the Mayor of the City.

Originally capable of seating 11,000 supporters, by 1978 the stadium peaked with a capacity of around 20,000. Over the years this figure has been reduced as football grounds across Europe generally became all-seated. During the 2001/2002 season, the athletics track was removed and a new north stand was built to comply with regulations set by the National Football League.

The record crowd to date was set during the 1979/1980 season when AS Saint-Etienne visited Stade Lavallois at the start of the season on 24th August 1979. A reported 20,849 fans saw the visitors sneak a 3-2 victory, which broke the previous previous record attendance of 20,000 which was also set when Les Verts previously came to town in December 1976.

During the 1983/1984 season Stade Lavallois defied expectations of relegation and managed to produce a fifth place finish which saw them qualify for the UEFA Cup. The club’s only European jaunt to date, and the highest level of football held at Stade Francis Le Basser since it opened, Lavallois narrowly defeated Dynamo Kiev 1-0 in the first round before bravely losing to Austria Wien 5-3 on aggregate.

Whilst Stade Francis-Le Basser has yet to host a full International of the men’s national team, it has hosted a women’s friendly between France and New Zealand on 22nd November 2014. Attended by 9,300, the venue has proved itself more than capable of hosting International football.

Below is a seating plan of Stade Lavallois's Stade Francis Le Basser: 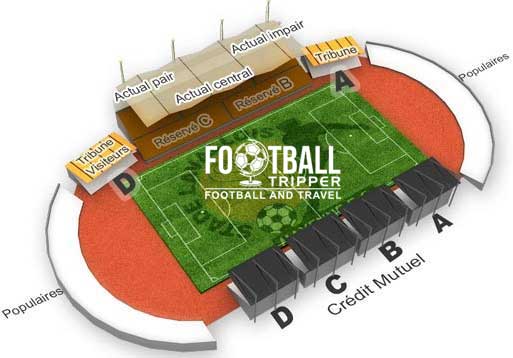 How to get to Stade Francis Le Basser

Where is Stade Francis Le Basser?

What is the capacity of Stade Francis Le Basser?

As of 2023 Stade Francis Le Basser has an official seating capacity of 18,739 for Football matches.

Covid Restrictions may be in place when you visit Stade Francis Le Basser in 2023. Please visit the official website of Stade Lavallois for full information on changes due to the Coronavirus.