Stade Gaston Petit is a 1959 built multi-purpose sports venue located in the central French city of Châteauroux. Home to lower league football team La Berrichonne de Châteauroux who have only ever featured once in Ligue 1, the ground has a capacity of 17,173.

Stade Gaston Petit first opened on September 13th 1964 under the generic name of Municipal Stadium, but was later renamed in honour of Gaston-Petit who served as the Mayor of Châteauroux between 1967 and 1971. The planning process for the first iteration of Stade Municipal took over 30 years with the stadium’s genesis dating as far back as 1929 when the first plan was submitted to the council.

Naturally delayed due to the onset of the Second World War, and compounded by uncertain economic conditions, the original stadium changed very little until the 1990s. Large scale renovations took place over a five year period between 1992 and 1997, and the completion coincided with the club being promoted to Ligue 1 after being crowned champions of the second division during the 1996/1997 season.

Participating in Ligue 1 for the first team in the club’s history and with the completion of the refurbished stadium, crowds during the season were at an all time high. The record attendance was set during the second half of the season on 24th January 1998 when LB Châteauroux took on Olympique de Marseille.

In 2011 Stade Gaston-Petit courted controversy when synthetic turf was installed over the Summer in time for the start of the season. Becoming the third French club behind FC Lorient and AS Nancy to do so, the move predictably attracted criticism from some players and sections of the media.

As for the future of LB Châteauroux’s stadium it appears that the club will remain here for the long term. There were plans to expand the stadium to 20,000 and to develop the area around the ground into a wider sports and entertainment complex but these were abandoned in 2009 due to the onset of the global financial crisis.

Below is a seating plan of Châteauroux's Stade Gaston Petit: 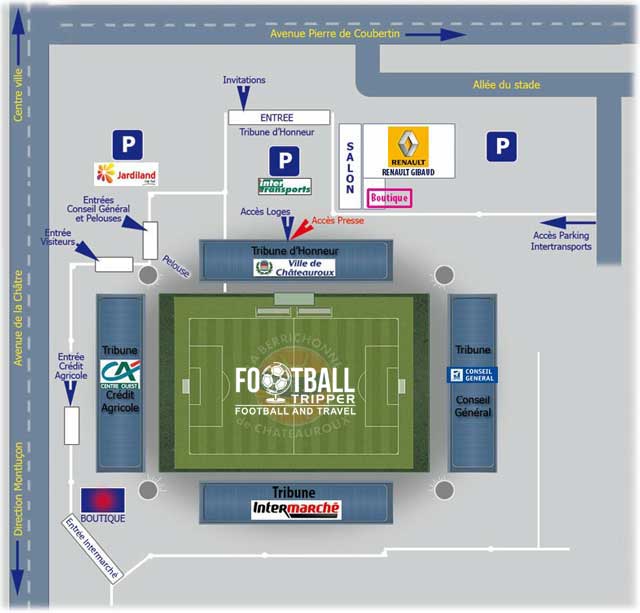 How to get to Stade Gaston Petit

Where is Stade Gaston Petit?

Who plays at Stade Gaston Petit?

What is the capacity of Stade Gaston Petit?

As of 2022 Stade Gaston Petit has an official seating capacity of 17,173 for Football matches.

When was Stade Gaston Petit opened?

Covid Restrictions may be in place when you visit Stade Gaston Petit in 2022. Please visit the official website of Châteauroux for full information on changes due to the Coronavirus.