Stade Parsemain is a multi-purpose football stadium located in the coastal commune of Fos-sur-Mer towards the South of France. First opened in 2005 with a capacity of 17,000, the ground is primarily used for the football matches of local team Football Club Istres Ouest Provence.

Stade Parsemain first opened on 9th April 2005, and the inaugural match against FC Sochaux was attended by 7,397 supporters who made the belated trip to check out the new ground.

The stadium opened approximately 6 months later than scheduled after FC Istres earned promoted for the first time in their history to Ligue 1. Designed to comply with Ligue 1 stadium regulations, the club were forced to play the majority of the season at Nîmes Olympique’s Stade des Costieres.

Consisting of three stands which gives results in a seating capacity of 9,500, the overall capacity is somewhat inflated due to the terrace behind the northern goal which is capable of accommodating 4,500 supporters. The covered grandstand, the largest of all sections is capable of seating 3,000 supporters.

To date the record attendance was set in May 2005 when FC Istres took on Olympique Marseille towards the end of the season. This fixture against one of the biggest clubs in France was seen live by an impressive crowd of 13,614. 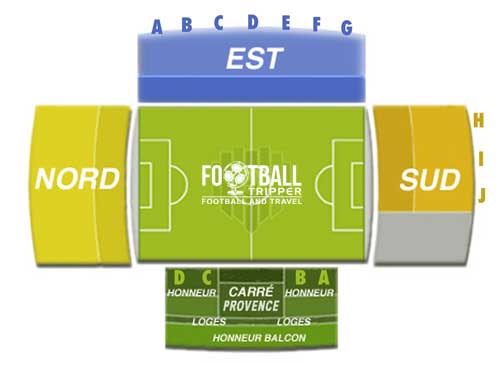 How to get to Stade Parsemain

Who plays at Stade Parsemain?

French side Istres play their home matches at Stade Parsemain.

What is the capacity of Stade Parsemain?

As of 2023 Stade Parsemain has an official seating capacity of 17,000 for Football matches.

When was Stade Parsemain opened?

Stade Parsemain officially opened in 2005 and is home to Istres

Covid Restrictions may be in place when you visit Stade Parsemain in 2023. Please visit the official website of Istres for full information on changes due to the Coronavirus.