Stade Dominique Duvauchelle is a multi-purpose sports stadium located in the commune of Créteil which is regarded as a southeastern suburb of Paris. Named after a popular local sports journalist who died shortly before the stadium’s opening, the 12,150 capacity has been home to football team US Créteil-Lusitanos since opening in 1983.

Stade Dominique Duvauchelle first opened on 24th September 1983 in time for the start of the incoming season. Originally consisting of just 6,000 seats, two further expansions have occurred since opening in order to give the ground its current capacity of 12,150. The first occurred in 1999, and the second in 2004 which saw the construction of a new 2,050 capacity south stand.

Municipally owned, the stadium features an athletics track around the perimeter of the pitch and was used to host the 1989 French Athletic Championship. Multi-purpose by design, Stade Dominique Duvauchelle continues to host training and events of the local athletics club, as well the football matches of US Créteil.

Remarkably the record attendance for a club match at the stadium currently sits at just 6,325 despite the capacity being essentially twice this number. Set during a pre-season friendly against AS Saint-Etienne on 5th August 2001, the average attendances since the club were promoted to Ligue 2 are 2,603 (2013/2014) and 2,389 (2015).

During a Coupe de France Round of 16 against reigning league Champions Olympique Lyonnais a much more respectable figure was set. 10,488 supporters attended the game on 6th January 2008, and Stade Dominique Duvauchelle even had a sell out attendance for a friendly between Cameroon and Senegal on 9th February 2009.

The stadium is named after Dominique Duvauchelle who was a local sports journalist and supporter who sadly died just before the stadium opened.

Below is a seating plan of Créteil's Stade Dominique Duvauchelle: 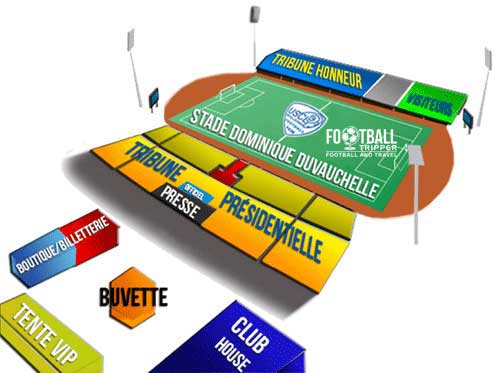