Parc des Sports Annecy is the home stadium of two smaller ligue 1 clubs: Évian Thonon Gaillard FC and Annecy F.C. The modest capacity of 15,660 spectators if offset by the spectacular views of the surrounding Alps, and the abundant supplies of Evian water which are probably available to buy everywhere.

Parc des Sports is a multi-purpose arena which is the current home of  French Football clubs Evian Thonon Gaillard FC  and FC Annecy. Construction began in 1958, and was completed 6 years later with the stadium’s inaugural event being an Athletics event on 18th July 1964 between Italy and France which heralded a large part of the Parc des Sports future usage.

Located in the Annecy commune of Haute-Savoi, Evian FC originally played their home fixtures at Stade Joseph-Moynat but upon promotion to Ligue 2 in the 2010-2011 season, the club had to find a new home as Joseph-Moynat failed to meet the required safety standards of the division.

After assessing the viability of renovating their current home, they opted to temporarily share with Annecy FC and are currently exploring their future stadium options, although their preferred move to Stade de Geneve in Switzerland was rejected by UEFA.

Annecy Football Club who compete in the seventh tier of French Football on the other hand are more than satisfied with the current facilities, and will be for the foreseeable future.

Below is a seating plan of Évian's Parc des Sports Annecy: 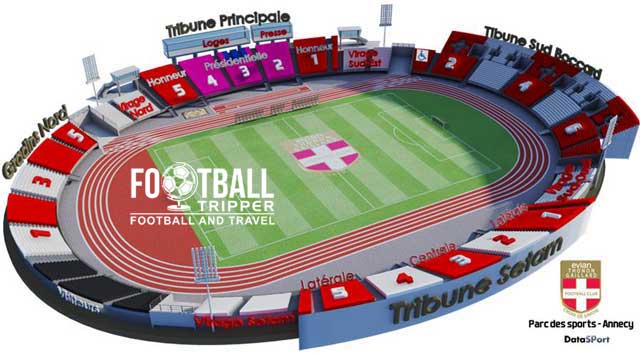 Parc des sports is made up of four stands: Nord, Est, Sud and Oust.

Away fans are housed within the Garadins Nord which is a Curva which runs behind the northen-most goal-end. The away section by default is comprised of around three blocks of seating towards the western tribune, although this can be increased depending on the levels of demand.

Uncovered and exposed to the elements, the facilities within this Curva Nord are pretty rudimentary. The views from the corner also leave a lot to be desired due to the large distance between the stand and the pitch, courtesy of the unpopular athletics track. Parc Des Sports Annecy does have some decent Alpine views, and a pleasant outdoors feel to it however.

The map below outlines some of the most popular Irish Pubs and Sports Bars within Annecy-le-Vieux, with the local area surprisingly having quite  a lot of choice for such a relatively small town.

There are a handful of dining options around Parc des Sports such as Pizzas’Choch, Le Bowl bowling alley which does American style fast food and New Delhi Specialities Indiennes which does a decent curry. On the walk back towards Le Lac D’Annecy there are plenty more options such as restaurants which specialise in the local Rhône-Alpes cuisine.

Both Evian TG and Annecy FC operate club shops at Parc des Sports stadium as well as their own online stores. The main store of Evian TG is located in the city centre on 18 Avenue du Parmelan 74000, with the online store’s address being: https://www.etgfcboutique.com/.

As for Annec F.C, the club lack a dedicated e-commerce website and instead offer fans of the club a online catalogue of sorts with products available to buy listed here.

Neither team’s site suggests that a guided tour of Parc des Sports is a remote possibility and with a 15,660 capacity and construction dating back to the 1960s there really isn’t much to see. Notwithstanding the majestic Alpes mountain range of course.

How to buy Évian Tickets

Tickets too see both Evian TG and Annecy FC can be purchased either Online, at their respective club shops or at via Francebillet and other third party vendors.

Neither side completely sell out their stadium, with the more widely supported and historically more successful Evian understandably drawing larger home attendances. This means you can often stroll up to the stadium on the day of the match and watch some football but you do run the risk of either getting a poor seat or not getting a ticket at all.

Prices to see Evian in Ligue 1 range from €13.00 for a seat behind the goal, up to €55.00 for a central seat at the main stand, with an added premium of a few euros to be expected for high-profile matches against nationally supported teams. Ticket prices for Annecy FC are considerably less as they play in the second tier of French Football.

How to get to Parc des Sports Annecy

Where is Parc des Sports Annecy?

The city of Annecy is located at the Northern foot of the Alps complete with resplendent Lake. The Parc des Sports stadium is situated within the top part of the city approximately 2km away from the historic city centre and main train station.

As the Parc des Sports is on the outskirts of town it is very easy to drive to with the A41 motorway linking Annecy to both Switzerland and France.  Once on this motorway take exit 16 and proceed into the city along Boulevard de la Rocde until you can see the stadium on your left hand side which will be accessible along Avenue du Stade.

The address for satnav is “Rue Pierre de Coubertin, 74000 Annecy”

Parking is notoriously difficult around the Annecy Sports Park, and thus one can has written a guide to parking around the stadium her. Just follow the link, if you’re using Google Chrome it will automatically translate.

Gare d’Annecy is the main railway station of the city and was first opened  way back in 1866 which is a long time ago. Currently SNCF (French National Rail) operate services out of the station wit high speed routes to Paris and Geneva available.

The Rhône-Alpes region has several airports with there not being a de facto “best” – it all depends where you are travelling from and who is offering the cheapest flights. The closest is probably Geneva International Airport which is 45km North in Switzerland with Lyon-Saint Exupéry Airport being France’s answer, although it is 118km away and one hours drive away.

What is the capacity of Parc des Sports Annecy?

As of 2023 Parc des Sports Annecy has an official seating capacity of 15,660 for Football matches.

What is the postcode for Parc des Sports Annecy?

The postcode for Parc des Sports Annecy is 74000.

Covid Restrictions may be in place when you visit Parc des Sports Annecy in 2023. Please visit the official website of Évian for full information on changes due to the Coronavirus.