Stade de la Vallée du Cher is a multi-purpose sports venue located in the city of Tours which is the capital of the Indre-et-Loire region. Predominantly used for football matches of local team Tours FC, the 1978 built stadium has a current capacity of 13,500.

Stade de la Vallée du Cher first opened in 1978, peaking with a capacity of 22,000 before being scaled down to 13,500 as more stringent safety regulations were introduced for stadiums across Europe. Former mayor of Tours, Jean Royer, was instrumental in the ground’s creation as he wanted to give the city a stadium and football team it could be proud of. Tours FC had previously played at Stade de Grammont.

The inaugural fixture was held on 2nd September 1978 at the start of the Ligue 2 season against Amiens. Constructed over two phases, Stade de la Vallée du Cher opened with just 8,000 seats, however the following season the remaining stands were completed and the planned 22,000 capacity was reached.

To date the record attendance for a league match was set on 29th May 1981 when 21,595 fans when saw AS Saint-Etienne come to town for a season defining match for both teams. FC Tours were facing the prospect of relegation and at the other end of the table, Saint-Etienne were battling with FC Nantes for the Ligue 1 title. Thankfully both teams achieved their objectives, and Nimes Olympique and Angers SCO were relegated.

After renovation work between 2006 and 2007, the capacity of Tours stadium has been reduced to 16,247. Additional exit points and stairs were installed in order to satisfy updated fire safety regulations. The down-size in the number of seats is unlikely to affect the club too much as based on average attendances, the ground still has enough excess capacity to spare.

Below is a seating plan of Tours's Stade de la Vallée du Cher: 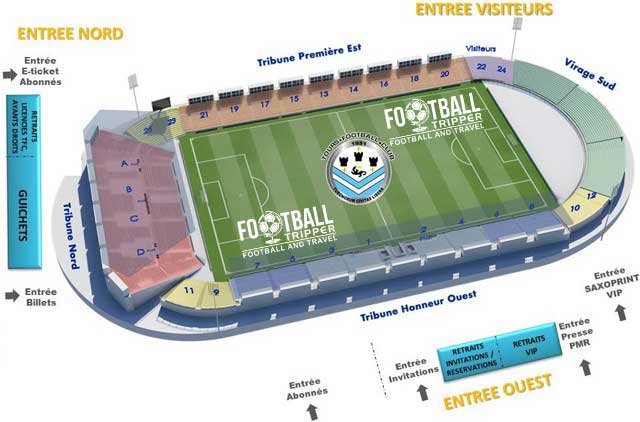 How to get to Stade de la Vallée du Cher

What is the capacity of Stade de la Vallée du Cher?

As of 2023 Stade de la Vallée du Cher has an official seating capacity of 13,500 for Football matches.

What is the postcode for Stade de la Vallée du Cher?

Covid Restrictions may be in place when you visit Stade de la Vallée du Cher in 2023. Please visit the official website of Tours for full information on changes due to the Coronavirus.