Olimpiyskiy National Sports Complex or simply the Olympic Stadium Kiev is the largest stadium in Ukraine with an approximate capacity of 70,050. Renovated for the Ukrainian and Poland hosted EURO 2012 tournament, the venue hosted the final game between World Champions Spain and Italy, with the former winning comfortably by four goals to nil.

Dynamo Kiev’s home ground has traditionally been the smaller Valeriy Lobanovskyi Dynamo Stadium with the Olympic Stadium reserved for high profile matches such as derby matches, cup finals and Champions League matches, However, after the redevelopment of the National Stadium for Euro 2012 which Ukraine co-hosted with Poland, Dynamo Kiev signed a five year tenancy agreement in 2011 which will make the start of the art stadium their home until at least 2016.

Dating as far back as 1923, to nobodies surprise Olimpiyskiy National has undergone numerous transformations over the 20th and 21st century with the most recent occurring over a period of three years between 2008 – 2001. The lower seating tier was completed demolished and rebuilt with a new west stand added which included modern corporate hospitality facilities added as well as new roofs for sections of the stand.

The 70,050 capacity ground was reopened by Ukrainian president Viktor Yanukovych on the 8th October 2011, with the inaugural match taking place a month later in November against Germany ,resulted in an entertaining 3-3 draw. Coincidentally, the architects of the stadium were also from Germany, with Gerkan, Marg and Partners also designign stadiums for the 2014 World Cup in Brazil.

As the largest capacity ground of Euro 2012 ahead of Poland’s National Stadium, The Olimpiyskiy was selected to host the final game of the tournament, with the iconic Olympic stadium also hosting a three group D matches, and a quarter final which saw Italy defeat England on penalties. In addition to the final which saw Spain retain their Euro Championship title after also winning the 2008 tournament, the ground held the opening ceremony with a performance by Shakira. 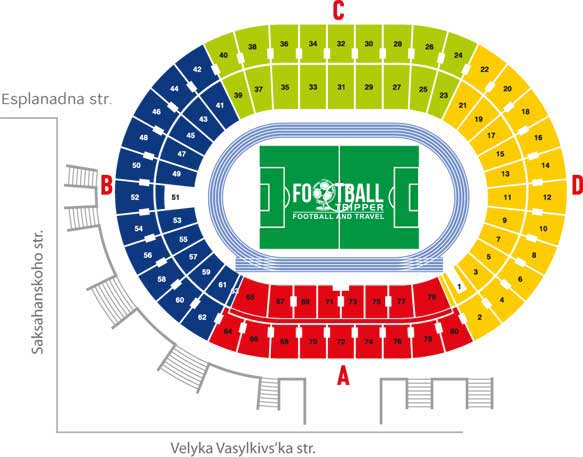 Away fans are usually housed within the south-west corner of the stadium typically within the lower section consisting of blocks 1, 3 and 5.

Reports suggest that Everton took just over 1,000 supporters for their Europa League Round of 16 clash against Dynamo Kyiv back in March 2015, however there’s no way of knowing whether this was the entire allocation or simply the amount of fans who made the trip.

There is a fanshop located at the NSC Olimpiyskiy which stocks a variety of sports goods including official merchandise of the Ukrainian national team and Dynamo Kiev amongst other teams. With the exception of Dynamo’s online store, this is easily the best place to purchase souvenirs.

With the exception of match days Stadium tours of the NSC Olimpiyskiy are available four times a day, seven days a week all year round. Lasting approximately 40 minutes per session, tours run at 11.00 am, 1.00 pm, 3.00 pm, and 5.00 pm.

The tour departs from the reception next to the Gate number 4 towards the west, and tickets cost 50 UAH for adults, and 25 UAH for everyone else including children, students and pensions.

Tickets to see Dynamo Kyiv in action at the Olympic Stadium can either be purchased online from the official site where you can print from home, or acquired in person at the main box-office seven days a week between 10.00 am – 7.00 pm.

Note: 200 Uah at the time of writing equals just over €8.30 so all tickets are a bargain if you’re from the eurozone.

How to get to Olimpiyskiy National Sports Stadium

Where is Olimpiyskiy National Sports Stadium?

The National Olympic Stadium is located around 2.5 km south of what many would regard as the centre of Kyiv. Likely to take the average football tripper no more than 30 minutes by foot, the stadium is in a highly accessible setting.

As the surrounding roads within a 1.5 mile radius are closed on matchdays its not recommended that you drive to the stadium during an event. If you wish to drive regardless then look for a parking garage further away such as the train station and then try to get the metro in.

Kiev Central Station sometimes known as the Passenger Railway Station features over 14 tracks with domestic services to the likes of Dnipropetrovsk (6 hours), Lviv (9 hours) and an overnight service to Donetsk (12 hours).

There are also plenty of lengthy services to European city’s such as Warsaw (16 hours), Berlin (22 hours) and even Venice (45 hours)!

Like other large European cities, Kiev also boasts its own Metro System which forms an integral part of the public transport network.

The two closest metro stops to the stadium are the Olimpiyska to the left of the stadium on the Blue M2 line, and the Palats sportu which is north located on the Green M3 line.

On matchdays however these appear to be closed to avoid congestion with the nearest accessible metro stops becoming the next ones along the line which in this case is Palata “Ukraina” (Blue M2 line), and Klovska (Green M3 line).

Boryspil International Airport is the largest airport in Ukraine, accounting for over 65% of the country’s air traffic. Situated 29km east of the capital city. Upon landing there is a 24 hour Sky Bus which can take you to the main station in the city centre in approximately 1 hour and 10 minutes.

8km southwest of the city centre there is also Zhulyany Airport which is much smaller albeit served by a handful of budget airlines. Sometimes sold as Kyiv International Airport the largest operator to western Europe appears to be Wizz Air.

There are quite a few accommodation options within five minutes of the Olympiyskiy with the Royal Olympic and the President Hotels two choices which are seemingly within the complex. Two blocks west along Velyka Vasylkivska street there is the Dream Hostel, Royal Hotel Paris, and Evropeyskiy.

What is the capacity of Olimpiyskiy National Sports Stadium?

As of 2022 Olimpiyskiy National Sports Stadium has an official seating capacity of 70,050 for Football matches.

What is the postcode for Olimpiyskiy National Sports Stadium?

The postcode for Olimpiyskiy National Sports Stadium is 02000.

Covid Restrictions may be in place when you visit Olimpiyskiy National Sports Stadium in 2022. Please visit the official website of Dynamo Kyiv & Ukraine National Team for full information on changes due to the Coronavirus.