Arena Nationala or just the National Arena is the home of the Romanian men’s football team although it is occasionally used to host the matches of both Dinamo and Steaua Bucharest.

Constructed over a three year period between 2008 and 2011, the stadium replaced the former national stadium which first opened in 1953 and had now become completely inadequate for the modern game of football.

The inaugural fixture at the National Arena was scheduled to take place on 10th August 2011 against Argentina, however the South Americans had to cancel the game due to manager Sergio Batista stepping down after poor results.

Subsequently the opening match was pushed back to 6th September when France visited for a Group D qualification match of Euro 2012. The 0-0 draw was played out in front of a crowd of 49,137, with the record attendance of 53,329 currently set a year later during a 2014 World Cup qualifier against Netherlands.

Recognised by UEFA as a Category 4 Venue, Romania’s National Stadium was chosen to host the 2011/2012 Europa League final between Atlético Madrid and Athletic Bilbao. The stadium will also host four matches of the Euro 2020 tournament which is set to take place across several countries as a romantic one-off.

Despite being popular by football fans and UEFA, the stadium’s construction was not without controversy. It was claimed that the project was at least 20 weeks behind schedule, and there were ongoing concerns about the cost rising when a €20 million euro retractable roof was proposed midway through the building work.

Below is a seating plan of Romania's Arena Nationala: 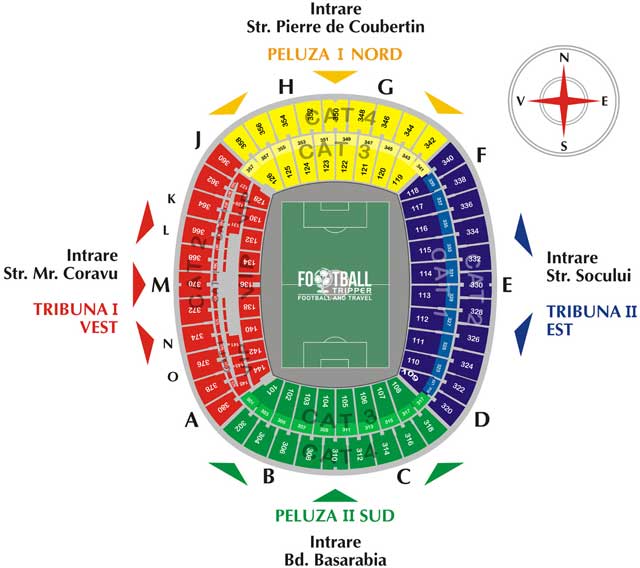 Romania’s National Arena is comprised of two-tiers of continuous seating which forms a single bowl:

When Chelsea played Steaua Bucuresti in a Round of 16 in the Europa League, away fans were housed within the upper tier of the north-west corner which is accessible via Gate H.

For international matches where the number of travelling supporters is expected to be larger additional blocks of seating are allocated including 124-126 and 355-358.

Whilst there alcohol is not available once inside the stadium, you will be pleasantly surprised by both the night-life and range of bars within Bucharest itself.

It doesn’t appear as if stadium tours are currently available of Romania’s National Arena, although we have to say that we’re pretty surprised about this. If this ever changes, we’d be delighted to update this section.

How to buy Romania Tickets

The box office at the stadium is generally open during the week between 11.00 am until 7.00 pm during the week, and always for a few hours before kick-off. This gives fans plenty of opportunity to purchase tickets for both Steaua and Dinamo matches.

As for International games, tickets should always be purchased in advance via your country’s football association. You will then likely have to collect them from an agreed point in the city before kick-off.

How to get to Arena Nationala

Where is Arena Nationala?

Romania’s National Stadium sits some 4.9 km east of Bucharest City Centre, with the resulting 60 minute walk not very practical for the majority of football fans.

You will be hard pressed to find parking around the stadium so you’re much better off catching some form of public transport outlined below.

The nearest metro station Piata Muncii will drop you off in the neighbourhood next to the stadium. From here it’s less than a 15 minutes walk, however it’s not always recommended for the visiting supporters due to the potential for disorder.

Henri Coand? International Airport is the main airport of both Bucharest and the country of Romania, with numerous daily flights to major European and global destinations.

It sits 16.5km north of Bucharest’s city centre, and upon landing you can catch a direct train service to Gara de Nord train station. There are also plans to connect the two via a new metro line which is set to be built between 2017.

The nearest place to stay is Hotel Bliss approximately 20 minutes south of Parcul National, however you’re much better off catching the metro back to the lively centre of Bucharest where much more varied options greet you.

The Hotel International, Europa Royale and Hotel Opera are three reasonably priced options you might want to use as the starting point of your research.

Who plays at Arena Nationala?

Romanian side Romania play their home matches at Arena Nationala.

What is the capacity of Arena Nationala?

As of 2022 Arena Nationala has an official seating capacity of 55,634 for Football matches.

When was Arena Nationala opened?

Arena Nationala officially opened in 2011 and is home to Romania

Covid Restrictions may be in place when you visit Arena Nationala in 2022. Please visit the official website of Romania for full information on changes due to the Coronavirus.