Vasil Levski National Stadium is the home stadium of the Bulgarian national Football team and it is used to host important domestic matches such as the Sofia derby and high profile European games such as the Champions League.

The current version of Vasil Levski National Stadium first opened on 5th July 195, and upon opening was immediately used to host athletics competitions. The inaugural football match as held between Dinamo Sofia and FC Wien a month or so after opening, and the first international game saw Bulgaria take on Czechoslovakia on the 6th October in a qualification match for the 1954 World Cup which was set to be held in Switzerland.

Located within Sofia’s oldest park, Borisova gradina, the stadium essentially replaced the two previous communist built stadiums which were located on the same site. Yunak Stadium (1928) had a capacity of 15,000  to host national matches and Levski stadium (1934) was the previous home ground of Levski Sofia. When the new was built, Dinamo Sofia were compensated by being allowed to build a the Georgi Asparuhov stadium in the suburbs of Sofia.

Named after Vasil Levski (1837 – 1873) who led a revolutionary movement to liberate Bulgaria from Ottoman Rule, he is widely regarded as the greatest Bulgarian of all time, and thus its only fitting that a national stadium – the country’s largest was named after him. As well as being home to the Bulgarian national team, it has also been used since opening to host The Bulgarian Cup Final and thus in some respect is their equivalent of Wembley Stadium.

Originall Vasil Levski National Stadium consisted of just a lower tier of seating, and although the plan stated that the stadium would have 42,000 seats, it wasn’t until a decade after opening in 1966 that this would be the case. Thus, it could be said that the stadium was constructed across two main phases. This was also when the floodlights were added which permitted the playing of match at night and in low-light conditions.

Commonly associated with football across Europe, the stadium has definitely lived up to its multi-purpose arena billing since opening. The wider sports complex it exists within has allowed the stadium to host a multitude of events including the 1967 European Basketball Championship, and concerts such as Metallica and AC/DC.

Below is a seating plan of Bulgaria's Vasil Levski National Stadium: 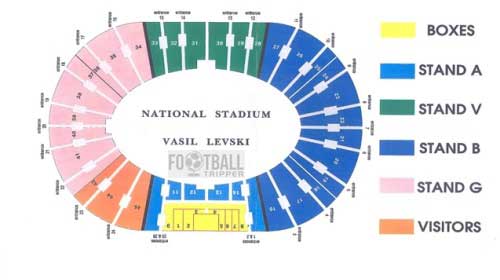 Vasil Levski is comprised of a single-tier of continuous seating divided into four approximate sections:

When Liverpool FC took on Ludogorets in a Champions League match back in November 2014 the away fans were housed within blocks 43 and 44 of Sector G which is highlighted on the above seating plan in the colour orange.

Access is granted through gates 23 and 24 which are essentially on “Evlogi i Hristo Georgiev” boulevard which is the road which runs north of the stadium. The travelling contingent is essentially sat within the northernmost point of the stadium adjacent to the main covered stand.

Located less than a 30 minute stroll from Sofia’s glorious city centre, there are plenty of pubs and bars to keep you entertained both before and after the match.

There doesn’t appear to be a permanent club shop at Bulgaria’s National Stadium, this is perhaps due to its age and lack of full time tenants.

It doesn’t appear as if the city of Sofia currently offers fans the chance to undertake a tour of the facilities at Vasil Levski National Stadium. If this ever changes we’ll be sure to update this section.

How to buy Bulgaria Tickets

Tickets to see your country take on Bulgaria in Sofia should almost always be purchased through your nation’s football federation/association.

When Levski Sofia rent the stadium e.g Derbies, and Champions League matches you should be able to purchase tickets before kick-off providing the matches aren’t sold out. Don’t take this as gospel however, and always check the club’s official website.

How to get to Vasil Levski National Stadium

Where is Vasil Levski National Stadium?

Vasil Levski National Stadium sits exactly 2.0 km south-east of Sofia’s most central point which means it is a great urban ground to visit.

Parking at the stadium is very limited which means you should avoid driving on matchdays. If you must drive then park within walking distance of a metro station to ensure you can still access the stadium easily.

Bulgaria’s National Stadium is served by its own Metro Station known simply as “Vasil Levski Stadium”. Undoubtedly the easiest way of travelling to the ground, this sits on Sofia Metro Line 1 (red) around 3-4 stops from the city centre.

Sofia Airport is perhaps rather predictably the busiest airport in Bulgaria, and is undoubtedly the country’s main international flight hub.

Sitting 10 km east of Sofia’s city centre, upon landing you can catch a mixture of shuttle bus and Metro Line in order to get into the city within next to no time.

The Red Bed and Breakfast Sofia and Hotel Downtown are undoubtedly the two closest places to stay next to Vasil Levski Stadium, however as the city is compact and eminently walk able you’d be better advised to look further afield.

What is the capacity of Vasil Levski National Stadium?

As of 2023 Vasil Levski National Stadium has an official seating capacity of 43,230 for Football matches.

What is the postcode for Vasil Levski National Stadium?

The postcode for Vasil Levski National Stadium is 1000.

Covid Restrictions may be in place when you visit Vasil Levski National Stadium in 2023. Please visit the official website of Bulgaria for full information on changes due to the Coronavirus.