National Arena Philip II of Macedonia or simply the Philip II Arena is the home of the Macedonian Football Team and two local sides FK Rabotni?ki and FK Vardar.

The current form of the stadium largely came about in 1977 when architects Dragan Krstev and Todorka Mavkova drew up plans for a new south stand. Upon completion of this work in 1978, it became immediately clear that the rest of the stadium should be rebuilt in this modern style.

Unfortunately the renovation work took slightly longer than anticipated, and a new north stand was only opened on 30th July 2009 for a match between FK Rabotni?ki and Liverpool FC. Originally €32 million was pledged for the project, but this was later increased to €60 million.

The stadium was completed three years later on 25th July when the two goal-ends, the east and west stands were finally added. The first match to be played at the finished Arena took place between FK Vardar and FC Bate Borisov from Belarus in a second round qualification match of the Champions League.

Macedonia’s National Football Stadium is currently named after King Philip II who ruled the Greek kingdom of Macedon between 359 to 336 BC. Upon opening in 1947 however the stadium was known simply as the Gradski stadion Skopje or in English, “City Stadium of Skopje”.

During the start of the 2018 season, Philip II Arena is set to make history by hosting the UEFA Super Cup. This will mark the first time that the country of Macedonia has hosted a European club Final, with the winners of the Champions League facing the winners of the Europa League.

Below is a seating plan of Macedonia National Team's Toše Proeski Arena: 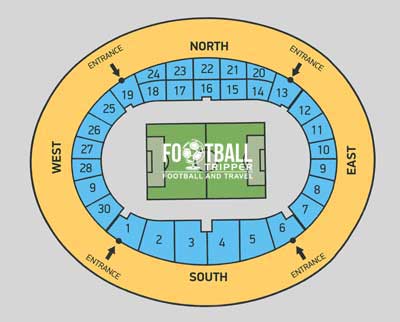 The National Arena of Macedonia is comprised one continuous bowl which can be divided into four approximate sections: North, East, South and West.

For Scotland’s 2014 World Cup qualifier against Macedonia, the travelling fans were housed within Blocks 6 and 7 of the east stand. Doors usually open up to three hours before kick-off.

There are numerous places to eat and drink before and after kick-off with the City Square around Makedonija St one of the more popular areas.

It doesn’t appear as if there’s a permanent shop at the National Arena, so if you plan on picking up any merchandise then do so when you’re attending a match.

It doesn’t appear as if stadium tours of Macedonia’s National Stadium are currently available. Should this change in the future we’ll be sure to update this section.

Tickets for international matches are usually purchased in advance of the match from the two  country’s football associations, and then for away fans at least, collected in the days leading up to the match.

There are rarely any on the gate sales for International matches even if  a low attendance is expected, however for the domestic matches you can usually pick up tickets on the day.

How to get to Toše Proeski Arena

Where is Toše Proeski Arena?

Philip II Arena sits on the western bank of the Vardar River next to the City Park approximately 15-20 minutes from Skopje’s historical centre.

The main railway station in the city centre sits on both the Belgrade-Thessaloniki and the Skopje-Prishtina International lines. This means you can easily travel to Kosovo, Serbia and Greece amongst other European cities.

Skopje “Alexander the Great” Airport sits 20km south-east of the city centre and essentially acts at the main flight hub of Macedonia along with Ohrid Airport.

Less than two minutes south of the stadium you will find three well priced places to stay: Hotel Kanet and Hotel Tomce Sofka.

Five minutes away there is also Hotel Skopje and Hotel Tims, however due to the compact size of the city centre you shouldn’t feel you have to stay right next to Philip II Arena.

Who plays at Toše Proeski Arena?

What is the capacity of Toše Proeski Arena?

As of 2023 Toše Proeski Arena has an official seating capacity of 33,460 for Football matches.

When was Toše Proeski Arena opened?

What is the postcode for Toše Proeski Arena?

The postcode for Toše Proeski Arena is 1000.

Covid Restrictions may be in place when you visit Toše Proeski Arena in 2023. Please visit the official website of Macedonia National Team for full information on changes due to the Coronavirus.