Borisov Arena has been home to both FC Bate and the Belarus National Team since opening in 2014. Capable of seating just under 13,000 spectators, the stadium is regarded as one of the most beautiful small stadiums in the world.

Borisov Arena was constructed over a three year working period between 2011 and 2014 at an estimated cost of 40 million euros. Designed by OFIS Architects who also worked on NK Maribor’s Ljudski vrt stadium, Borisov Arena is regularly rated as one of the most attractive small stadiums in the world.

The inaugural fixture played at Borisov Arena was the Belarusian Cup final on the 3rd May 2014. The game saw FC Shakhtyor Soligorsk defeat FC Neman Grodno 1-0, and although it was attended by an impressive crowd in access of 11,000, the match wasn’t completely sold out.

Higher attendances were recorded during the 2015 season when BATE Borisov participated in the group stages of the Champions League. Their match against Ukrainian side Shakhtar Donetsk on the 21st October 2014 attracted a crowd of 12,113.

Since opening Borisov Arena has become the de facto home of the Belarusian National team despite not being located in the capital city of Minsk. The first friendly was held on 4th September 2014 against Tajikistan, and since then it has hosted every qualification match of Euro 2016.

Below is a seating plan of BATE Borisov & Belarus National Team's Borisov Arena: 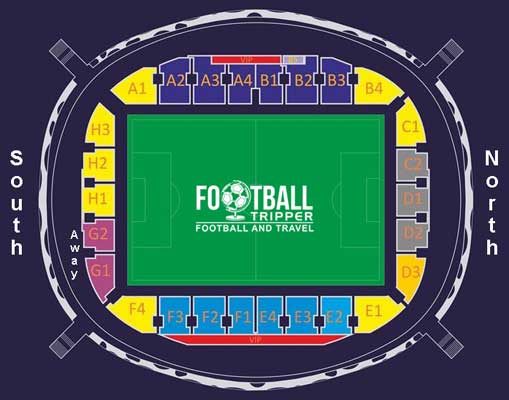 Away fans are housed within the eastern side of the south stand within seating areas G2 and G2.

Despite the lack of online presence of the local night-life rest assured that there will be plenty of places to drink in the city centre.

The FC Bate fan shop is located within the east stand of Borisov Arena. Fans can purchase a wide range of official merchandise and souvenirs.

Tours of Borisov Arena cost 40,000 rubles for adults, 20,000 for children and can be booked by phoning 80177 70-99-17. The official website doesn’t say if you can book stadium tours online or in person once you arrive at the stadium.

Tickets to see FC Bate play at home can either be purchased online or from the stadium’s box office leading up to the match.

For the international matches of Belarus you should always purchase your tickets through your country’s football association.

How to get to Borisov Arena

Where is Borisov Arena?

Borisov Arena is located out of town approximately 4.5 km south-west of Barysaw city centre. Likely to take the average football fan the best part of 1 hour to walk, public transport is definitely on the menu.

There are an estimated 1500 parking spaces for vehicles available at the stadium on matchdays.

The closest train station “????????” or Peczynski lies 1 km south-west of Borisov Arena. It is served by regional and commuter services from the railway station in the city centre.

Minsk National Airport approximately 66 km away is the nearest International Airport. Situated within the capital city, the majority of flights into Belarus are routed through here.

All accommodation options are to be found back within the city centre of Barysaw. Whilst there quite a few hotels you might struggle to find some of the more recognisable global names!

Who plays at Borisov Arena?

What is the capacity of Borisov Arena?

As of 2023 Borisov Arena has an official seating capacity of 13,126 for Football matches.

When was Borisov Arena opened?

What is the postcode for Borisov Arena?

Covid Restrictions may be in place when you visit Borisov Arena in 2023. Please visit the official website of BATE Borisov & Belarus National Team for full information on changes due to the Coronavirus.