Stadion Ljudski Vrt has been NK Maribor’s home ground for every season since the club formed back on the 12th December 1960 with the exception of two small periods in 1961 and 2008 when renovation work was carried out. It is regarded as one of the premier stadiums in Slovenia.

First opened back in 1952, it was originally the home of local side Branik Moribor before they folded, and were essentially replaced by current residents NK Maribor’s in 1960.

Before being used as a sports stadium, the ground was used as a cemetery, and later as a public park hence the name Ljudski vrt which translates as “People’s Park” or Volksgarten in German.

Initially conceived as a multi-purpose athletics venue with banks of earth acting as natural stands, the first concrete terraces were added in 1958. Three years later the iconic main stand was added which housed changing room facilities, club offices and training gyms. With its distinctive concrete arch, it can almost be seen as a precursor to Udinese’s Stadio Friuli which opened in 1976.

The stadium remained relatively untouched until the early 1990s when Slovenia declared independence from Yugoslavia. Converted to all-seating in 1998, the ground underwent renovation after NK Maribor became the first Slovenian team to qualify for the Champions League during the 1999/2000 season.

It wasn’t until 2006 that the current form of the stadium would be achieved with three new stands built over a two year period. Constructed on top of the troublesome athletics track, the redevelopment work cost an estimated 10 million euros, and has largely been seen as a tremendous success.

Below is a seating plan of NK Maribor's Stadion Ljudski vrt: 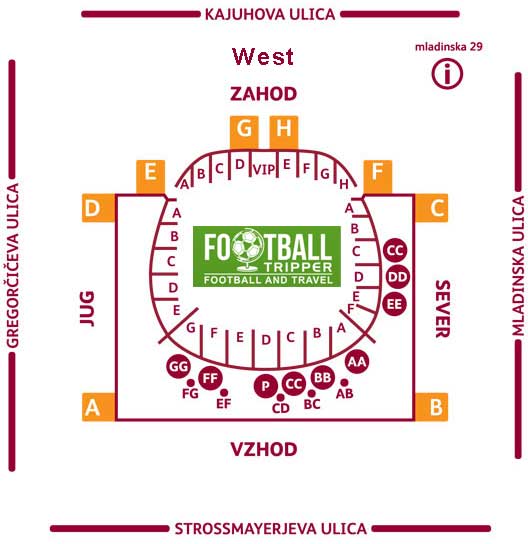 Ljudski vrt stadium is comprised of a horseshoe which stretches across three sides of the pitch, and a separate main stand to the west:

Away fans are usually housed within the north-west corner of the ground within seating sections A and B. Travelling supporters should enter via Gate F where there is an outdoor concourse area which is separated from the home fans.

When Wigan Athletic played NK Maribor in the Europa League during the 2013/2014 season, the club were allocated 652 tickets which appears to be the maximum away ticket allocation.

Most football fans tend to congregate around Castle Square which is no more than a fifteen minute walk away from the stadium.

There’s the usual range of fast-food options available from kiosk around the ground on matchday.

Fans can purchase official merchandise online from the NK Maribor Shop as well as the various sellers dotted around the stadium on matchdays.

There aren’t any stadium tours available of Stadion Ljudski vrt, however if this changes in the future we’ll endeavour to update this section.

How to buy NK Maribor Tickets

Tickets to see NK Maribor play at home can be purchased from the various ticket offices on the day of the match. Usually open for around 90 minutes before kick-off, there are two sales points in front of both the north (Sever) and south (Jug) stands.

How to get to Stadion Ljudski vrt

Where is Stadion Ljudski vrt?

Stadion Ljudski vrt sits on the northern bank of the River Drava, approximately 1.0 km north of down town Maribor which is the second largest city in Slovenia.

There aren’t any parking spaces currently available at Stadion Ljudski vrt although there are reportedly plans to construct an underground parking garage in the future.

Maribor Railway Station is centrally located within the city, less than 10 minutes east of Ljudski vrt. First opened in 1844, you can travel to both Vienna and Zagreb in 3 hours and 30 minutes.

The city’s main airport, Maribor Edvard Rusjan, is located just over 11 km south of the city centre. As the second largest airport in Slovenia there are plenty of International flight carriers which operate out of here including Adria, Aegean and Freebird Airlines.

The city centre might well contain numerous accommodation options however a quick search only throws up the Grand Hotel Ocean and Hotel City Maribor as being within five minutes walking distance to the stadium.

South of the river Drava there are a few more options such as Tabor, Hotel Bajt, and Hotel Betnava – all of which are around a 30 minutes walk.

Who plays at Stadion Ljudski vrt?

What is the capacity of Stadion Ljudski vrt?

As of 2023 Stadion Ljudski vrt has an official seating capacity of 12,994 for Football matches.

When was Stadion Ljudski vrt opened?

What is the postcode for Stadion Ljudski vrt?

The postcode for Stadion Ljudski vrt is 2000.

Covid Restrictions may be in place when you visit Stadion Ljudski vrt in 2023. Please visit the official website of NK Maribor for full information on changes due to the Coronavirus.