Stadion pod Dubnom is the home ground of MSK Zilina, and is currently one of three football stadiums used by the Slovakian National Team. Situated in Zilina which is the fourth largest city in Slovakia, the ground is capable of accommodating just over 11,000 supporters.

The site on which today’s Štadión pod Dubnom sits has been used to host football matches more or less since MŠK Žilina’s formation back in 1908. It wasn’t until 1941 however that the first stands were erected, and the plot of land had enough permanent facilities to begin being regarded as a proper football stadium.

Štadión pod Dubnom’s name is derived from its location close to the Dube? Hill which sits to the north of the stadium just across the river Váh. It literally translates into English as “Stadium under Dube? Hill”, and views of the roving hills can be seen from inside the ground with the exception of the northern goal-end stand.

At the turn of the millennium Štadión pod Dub?om underwent large scale renovation work in order to bring it into the 21st century. Beginning in 2002, modernisation was achieved across a seven year period with the east stand being the last section of the stadium to be rebuilt just in time for the start of the 2009/2010 season.

Redeveloped in stages in order to minimise disruption, temporary stands were erected behind each goal as work was slowly carried out across each side of the pitch. Upon completion Futbalový štadión MŠK Žilina was awarded three stars by UEFA.

The highest level of club football hosted at the ground undoubtedly game during the 2010/2011 season when MŠK Žilina reached the group stages of the Champions League. They were drawn into a group containing Chelsea, Marseille and Spartak Moscow but unfortunately finished last. 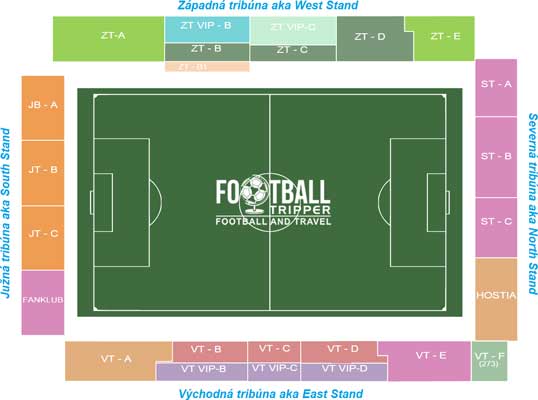 Away fans are housed within Block D of the North Stand which is capable of accommodating 596 fans per match – the standard ticket allocation for the visiting team. The turnstiles at the end of the underpass are accessible from ?avobrežná street.

With an excellent city location there’s a lot of drinking to be had in the city centre before and after the match.

Fans can purchase official merchandise from MSK Zilina’s Online Store in addition to the various sellers around the ground on matchdays.

It doesn’t appear as if there are any stadium tours available of the facilities at Štadión pod Dub?om.

Tickets to see MŠK Žilina in action at Stadion pod Dubnom can either be purchased online or in person at the box office on the south-east corner (Uhoľnej stret) either on the days leading up to the match or for up to four hours before kick-off on matchday.

How to get to Stadion pod Dubnom

Where is Stadion pod Dubnom?

Futbalový štadión MŠK Žilina sits on the southern bank of the Váh River next to the city’s main railway station, approximately 1.3 km north of the historic city centre.

The car park behind the eastern stand is reserved for those in possession of parking passes, whereas the north one is available for guests on a first come first serve basis.

Štadión pod Dubnom is literally next door to the station and can be walked to in two minutes. Upon exiting turn right onto Pavla Országha Hviezdoslava, and then right again Kysucká followed by a final right onto Uho?ná to reach the southern end of the stadium.

The local airport in Žilina is small and is no longer served by regular International flights which means the nearest airports are either the one in Bratislava (161 km) or Ostrava in the Czech Republic (114 km).

From Bratislava, the capital city of Slovakia, you can travel to Žilina by train in just over 90 minutes.

As Štadión pod Dub?om is right next to the train station there are plenty of accommodation options within a five minute walking distance. The Three closest are the Holiday In Zilina, Hotel Slovan and Best Western Plus. For those on a budget Hotel Slovakia 15 minutes south of the stadium looks like a decent shout.

Who plays at Stadion pod Dubnom?

What is the capacity of Stadion pod Dubnom?

As of 2023 Stadion pod Dubnom has an official seating capacity of 10,770 for Football matches.

When was Stadion pod Dubnom opened?

What is the postcode for Stadion pod Dubnom?

Covid Restrictions may be in place when you visit Stadion pod Dubnom in 2023. Please visit the official website of Slovakia National Team & MSK Zilina for full information on changes due to the Coronavirus.