Atatürk Olympic Stadium is a multi-purpose sports venue located in the Ikitelli district of Turkey’s largest city, Istanbul. With a current capacity of 76,092 it is also the largest stadium in the country having originally been built as the centrepiece of a failed 2008 Summer Olympics Bid.

Atatürk Olympic Stadium located within the ?kitelli district of Istanbul, is the largest stadium in Turkey with an impressive current capacity of 76,092. Named in honour of the country’s first President, Mustafa Kemal Atatürk, who was instrumental in the founding of the Republic of Turkey, the Olympic stadium was constructed between 1999-2002 as part of the country’s failed bid to host the 2008 Olympics which was awarded to Beijing.

Estimated to cost approximately 140 million USD at the time, it was awarded “Five star status” by UEFA and subsequently went on to the host the 2005 Champions League final. The fixture proved to be one of the most famous football matches of the decade with A.C Milan throwing away a three goal lead at half-time to eventually lose on penalties to Liverpool, inspired by man of the match Steven Gerrard.

Known as the “Miracle of Istanbul” Atatürk Olympic Stadium will be hard-pressed to ever top the excitement of that match but in the sport of football you can never rule anything out. Used primarily for matches of the Turkish National team, since opening the Olympic Stadium has been used temporarily by clubs as they seek to renovate their own stadiums.

Galatasaray used the stadium during the 2003-2004 stadium as their Ali Sami Yen Stadium was refurbished, whilst city neighbours Istanbul BB resided at the ground between 2007-2014 before moving to the new Basaksehir Fatih Terim Stadium. Currently Be?ikta? J.K are using the Atatürk Stadium from the 2014 season onwards as their BJK ?nönü Stadium is in the process of being demolished and rebuilt as the Vodafone Arena.

Below is a seating plan of Turkey National Team's Ataturk Olympic Stadium: 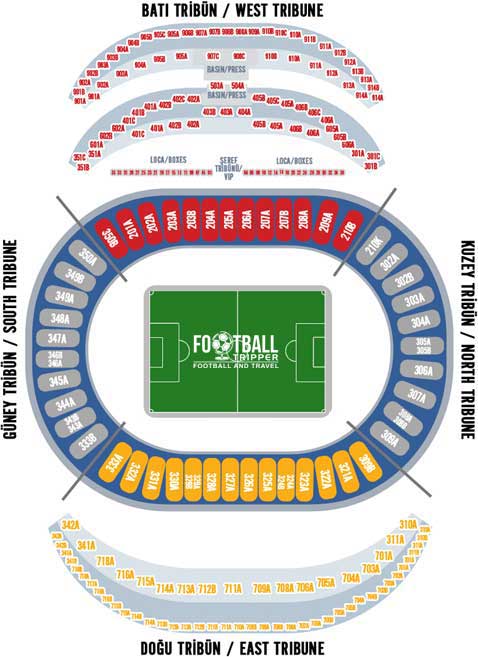 For the Europa League match between Besiktas and Liverpool FC on the 26th February 2015 away fans were housed within the western side of the south-stand. Entering the stadium via Gate R, it appears that the away supporters were allocated tickets within section 349A with a buffer zone created either side of them and the home supporters.

There are no bars, restaurants or shops either at the Olympic stadium or around the immediate vicinity of the stadium. As alcohol is banned from sale at the stadium, plan your drinking beforehand although you can purchase limited refreshments.

As Besiktas are only temporary residents at the stadium, and it isn’t really in a position to attract window shoppers, there isn’t a fixed club-shop which you can purchase merchandise from at the Ataturk Olympic Stadium.

The best place therefore to purchase official merchandise is online from The BJK Shop.

There aren’t any stadium tours available of The Ataturk Olumpic, however if this should ever change we’ll be sure to update this section.

As the matches of Besiktas are very unlikely to sell out, barring giant opponents in say, the Champions League, you can purchase tickets for Turkish Superliga matches at the stadium before kick-off. There’s ticket booths located more or less on each corner of the stadium, however you can also try online, and from some outlets around Istanbul.

How to get to Ataturk Olympic Stadium

Where is Ataturk Olympic Stadium?

The main railway station connecting Istanbul to the rest of Europe is Sirkeci which sits on the western side of the city. However for most European Football fans who are flying in, it’s unlikely that you will be using it or need to know where it is!

The Stadium is now served by its own metro line stop known as “Olimpiyat Parki”, however for many years this wasn’t the case which made travelling to the ground even more arduous.

Located on the M3 Line (the blue one), it forks out from Ikitelli Sanayi to become the last station on the left hand branch of the line, and can be boarded from Kirazli station where the M3 begins.

Kirazli is also connected to the M1b line which has decent links to the European side of Istanbul and the city centre.

Istanbul Atatürk Airport is actually closer to Istanbul’s Olympic stadium than it is to the city centre at a distance of 17.2km compared to 22km. As the main airport of Turkey’s capital city there are plenty of international flight carriers, and as a back up there is always the smaller Sabiha Gökçen Airport which serves some smaller countries.


Upon landing you can either catch the metro (light rail) into the city centre, or one of the express bus services known as “Havata?” which depart every half an hour between 4.00 am – 12.00 am daily.

There are no hotels close to the stadium so depending on your method of transport you essentially have two options.

If you are driving and want to make a quick getaway then then you could always try the Holiday Inn Istanbul Airport or the Radisson Blue Hotel. If you are getting a taxi or using the metro then you will find numerous accommodation options back towards the city centre.

Who plays at Ataturk Olympic Stadium?

What is the capacity of Ataturk Olympic Stadium?

As of 2023 Ataturk Olympic Stadium has an official seating capacity of 76,092 for Football matches.

When was Ataturk Olympic Stadium opened?

What is the postcode for Ataturk Olympic Stadium?

The postcode for Ataturk Olympic Stadium is 34306.

Covid Restrictions may be in place when you visit Ataturk Olympic Stadium in 2023. Please visit the official website of Turkey National Team for full information on changes due to the Coronavirus.