Hüseyin Avni Aker Stadium is a football ground located in the Black Sea coastal city of Trabzon, in north east Turkey. Home to Süper Lig side Trabzonspor since opening in 1951, the 24,169 capacity ground has come a long way since it was first built with 2,500 seats over 60 years ago.

Hüseyin Avni Aker Stad? first opened back in 1951 when the stadium comprised of a single stand, capable of accommodating little over 2,400 spectators. Named after Hüseyin Avni Aker, a former teacher and regional administrator for Trabzon between 1940 – 1944, Trabzonspor’s stadium has underwent numerous renovations over the years in order to keep up with the county’s growing interest in the sport of football.

The first major renovation came in 1981, with further expansions coming in 1994 and 2008 when over 1,200 seats were added in order to bring the stadium up to its current capacity of 24,169. In 2010, the corporate hospitably facilities were expanded with an additional 260 spaces created for sponsors, representatives of the leagues and the more affluent football fan.

Regarded as one the fourth largest team in Turkey behind the likes of Fenerbahçe, Galatasaray and Be?ikta?,  Hüseyin Avni Aker Stadium has a fearsome reputation amongst Turkish Football fans for being a difficult venue for travelling teams to visit. It is also famous for being one of the first grounds in Turkey to remove spectator fences which might go some way to explain the fans deep connection to the players on the pitch.

As for the future of Hüseyin Avni Aker Stadium, it is currently scheduled to be demolished in the final quarter 2015 as the club look to move into a brand new stadium. The new stadium known as Akyaz? Stad?, is expected to be built in time for the 2016 season with the ceremonial foundation stone laid by the Turkish Prime Minister on the 24th November 2013. It is expected to have a 40,000 capacity and is being built by the designers of Turk Telekom Arena.

Below is a seating plan of Trabzonspor's Hüseyin Avni Aker Stadium: 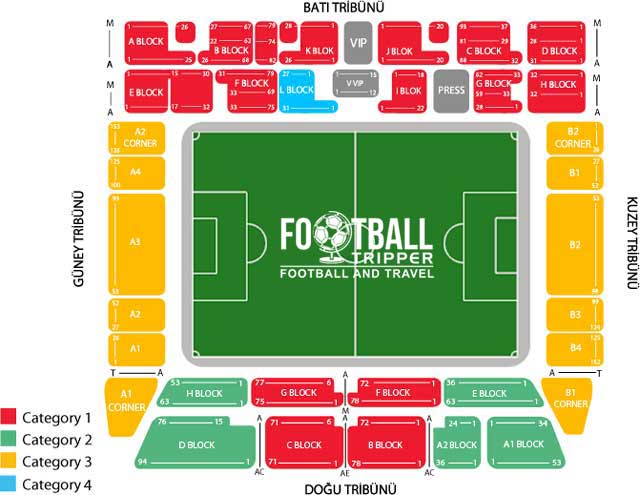