Kadir Has Stadium is a bad-ass multi-purpose stadium located in the almost perfectly central city of Kayseri. Part of the larger Atatürk Sports Complex, the 32,864 capacity Kadir Has stadium is used predominantly for the football matches of Kayseri Erciyesspor.

The inaugural match at Kadir Has Stadium was held on the 8th March 2009 between Kayserispor and Fenerbahçe during the 23rd week of the Turkish Super League. Taking just over two years to construct, the municipally owned stadium cost an estimated

68 million which equates to around €30 million euros.

Located within the heart of Atatürk Sports Complex, it essentially replaces the Kayseri Atatürk Stadium which is set to be turned into a mixture of commercial and residential buildings. First opened back in 1964, the stadium had a peak capacity of 26,500, and was previously home to both Kayserispor and Kayseri Erciyesspor.

Succeeded by more modern facilities, and indeed some of the most modern in the country, Kadir Has Stadium not only has a larger capacity at 32,864 but also benefits from being fully-covered. The roof which consists of  222 meters of  steel beam forms part of the stadium’s iconic design, and reportedly weighs over 600 tonnes making the stadium an absolute marvel from an engineering perspective.

As a second opening ceremony, the Turkish National team took on Azerbaijan at the end of the domestic season on 2nd June 2009. Proving that the stadium justified UEFA’s four star rating, the ground has since hosted two other International matches but this time qualifiers for the 2010 and 2014 World Cup against Estonia and Andorra respectively.

The stadium is named after Kadir Has who was a Kayseri entrepreneur and philanthropist who gave lots of his wealth back to the local community.

Below is a seating plan of Kayserispor & Kayseri Erciyesspor's Kadir Has Stadium: 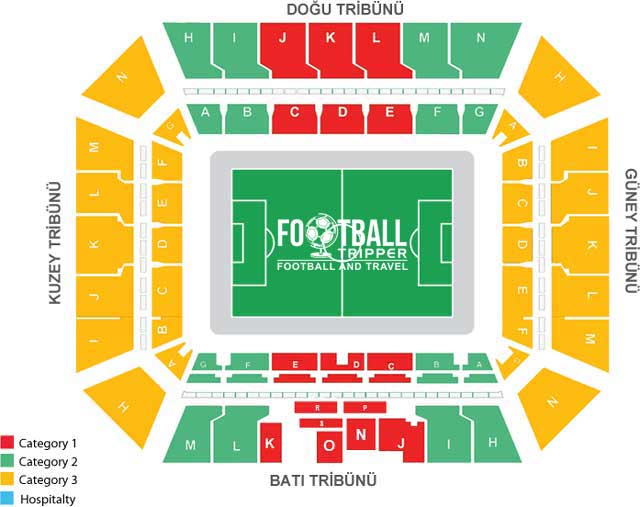