Kas?mpa?a Stadium was converted into a football ground in 2005 after previously being used as a multi-purpose athletics by the local sports clubs of the Kas?mpa?a neighbourhood in Istanbul. In its inaugural season the stadium consisted of a main stand to the south which snakes around to the eastern goal-end, capable of seating 9,576 supporters. The pitch featured a mini athletics track around the perimeter of the pitch giving it an oval appearance, and the facilities were rather basic.

Following promotion to Süper Lig Kas?mpa?a S.K relocated to the much larger Atatürk Olympic Stadium during the 2007/2008 season so that their stadium could undergo extensive renovation work. Two new uncovered stands were erected on the vacant northern side, and western goal-end which increased the capacity to a respectable 14,234.

Since opening as a football ground the stadium has been known as Recep Tayyip Erdo?an Stadium, in honour of the former Turkish Prime Minister and President. Recep Tayyip Erdo?an played for Kas?mpa?a S.K between 1969 and 1982 when the club were semi-professional, and famously rejected a move to city rivals Fenerbahçe which makes somewhat of a cult hero.


Currently the stadium satisfies UEFA’s basic stadium criteria however it has yet to host European matches. Kasimpa’s best league finish to date came during the 1961/1962 season when they finished 5th, however they’ve yet to replicate this in the modern era.

During the 2013/2014 season Be?ikta? ground-shared Recep Tayyip Erdo?an Stadium after the closure of their ?nönü Stadium. Currently awaiting the completion of The Vodafone Arena which is estimated to be ready by 2015, Be?ikta? will also be using the Atatürk Olympic Stadium.

Below is a seating plan of Kasimpasa's Recep Tayyip Erdoğan Stadium: 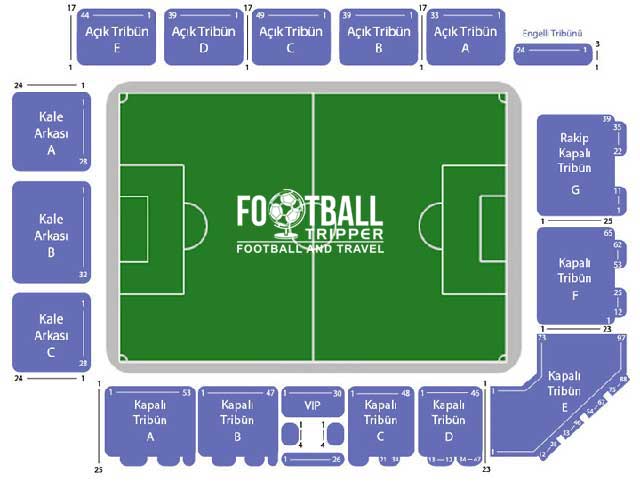