Yeni Rize Sehir Stadium is a multi-purpose sports stadium located in the city of Rize which belongs to the eastern section of the Black Sea Region of Turkey. Home to Süper Lig side Çaykur Rizespor, the 15,558 capacity ground has mostly used for football matches since opening in 2009.

Yeni Rize Sehir Stadium first opened on 24th August 2009 after a construction period of just under two years dating back to December 13th 2007. Costing an estimated 22 million TL which equates to around 10.5 million euros, the inaugural fixture was played against Fenerbahçe in order to test the facilities ahead of the 2009/2010 Turkish Süper Lig season.

Previously Çaykur Rizespor played their home matches at Rize Atatürk Stadium since the formed in 1953, however by the turn of the millennium the stadium had largely become outdated. By the time the Atatürk Stadium had closed it was capable of only accommodating 10,459 supporters, and thus the move to Yeni Rize ?ehir Stad? represented a 50% increase in capacity.

Situated within the heart of Rize Atatürk Sports Complex, Caykur Rizespor’s new stadium was built in line with UEFA’s specification, and thus is capable of hosting European Football matches should the club ever qualify. The new was selected as one of seven venues for the 2013 Under 20s World Cup.

In total it hosted two group games: Australia v El Salvador (1-2) and Turkey v Colombia (0-1), and a quarter final between France and Uzbekistan (4-0). Overall it was the second smallest venue of the World Cup ahead of the 7,083 capacity Akdeniz University Stadium and behind Kamil Ocak Stadium which had a capacity of 16,981. 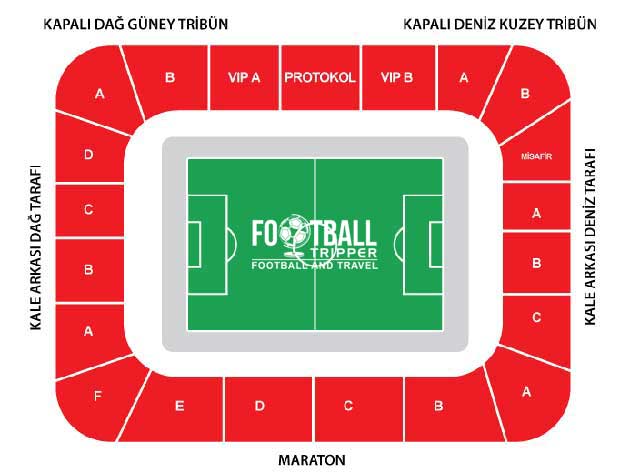 How to get to Yeni Rize Sehir

Where is Yeni Rize Sehir?

Who plays at Yeni Rize Sehir?

What is the capacity of Yeni Rize Sehir?

As of 2023 Yeni Rize Sehir has an official seating capacity of 15,558 for Football matches.

When was Yeni Rize Sehir opened?

Covid Restrictions may be in place when you visit Yeni Rize Sehir in 2023. Please visit the official website of Caykur Rizespor for full information on changes due to the Coronavirus.