Konya Atatürk Stadium is a 22,559 capacity multi-purpose stadium located in the Central Anatolia city of Konya. Chiefly used for the football matches of local Süper Lig side Torku Konyaspor, the stadium first opened in 1950, over 65 years ago.

Konya Atatürk Stadium first opened in 1950 as the city’s main sports stadium, and has been used by Torku Konyaspor F.C ever since. Famous for being only one of two Turkish football grounds to feature a cycling track around the perimeter of the pitch, the stadium has also retained an athletics track throughout its history perhaps slightly to the detriment of the matchday experience.

Throughout the latter half of the 20th century Konya’s Municipal stadium has undergone minor renovations, and thus has always retained an “old-school” feel to it. The ground underwent conversion to all-seating in 2005 which reduced the capacity to 22,456, however through the use of green and white plastic seats, the refurbishment has helped to modernise Atatürk’s appearance.

During the 2013/2014 season Konya Atatürk Stadium was selected as the venue for the Turkish Cup Final in recognition of its imminent closure. The match was contested between Galatasaray and Eski?ehirspor, with Robert Mancini’s men winning 1 nil courtesy of a man of the match performance from Wesley Sneijder.

The final match at Ataturk Stadium was played on 11th May 2014 between Konyaspor and Kayserispor as one of the last games of the 2013/2014 season. Konyaspor have since moved into a brand new stadium known as the Torku Arena. Fully enclosed, and purpose built for football the new Konya Atatürk Stadium is capable of accommodating 42,276 supporters.

Below is a seating plan of Torku Konyaspor's Konya Atatürk Stadium: 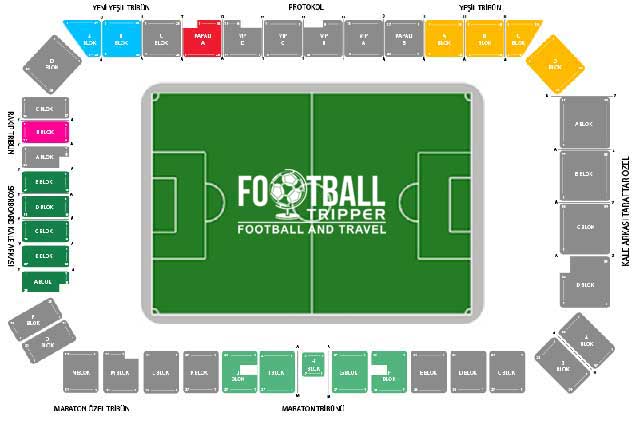