Lovech Stadium first opened in 1962, however after extensive renovation work which occurred over a two year period between 2010 and 2011, it is essentially a different stadium to the one which was originally built. Home to PFC Litex Lovech it is capable of seating 8,100 fans.

Lovech Stadium first opened in 1962 and has undergone two major renovations since opening resulting in today’s current capacity of 8,100. The first one occurred just in 1999 just before the millennium, and the second occurred more recently between 2010 and 2011, which resulted in all four stands being completed rebuilt.

To date the record attendance at Lovech Stadium was set in 1997 when 12,500 supporters saw the Bulgarian Cup Match between Litex Lovech and Levski Sofia, which the home side won 2 nil. For European games, a match against English side Aston Villa in 2008 reportedly drew a crowd of 8,000 which was a record at the time.

After PFC Litex Lovech qualified for the Champions League after a 1st place finish during the 2009/2010 season, three out of four stands were completely reconstructed in order to satisfy UEFA’s stadium regulations. Costing an estimated €3 million euros, work began on 12th May and finished a month late on July 10th thanks to the use of prefabricated materials and a dedicated workforce.

Unfortunately since the renovation work, the club have failed to progress to the group stages of either the Champions or Europa League. After winning both of their first qualifying rounds in 2010 and 2011, the club failed to progress past Mogren from Montenegro, and then Wisla Krakow from Poland.

Nevertheless, Litex Lovech proceeded with further renovation work on their stadium and in the Summer of 2011, completed their stadium as they built the main stand which was the final piece of the new stadium puzzle. With the foundations set to host European level football, expect the team to kick-on in recent seasons, and don’t be surprised if they are make it through to the group stages.

Below is a seating plan of Litex's Lovech Stadium: 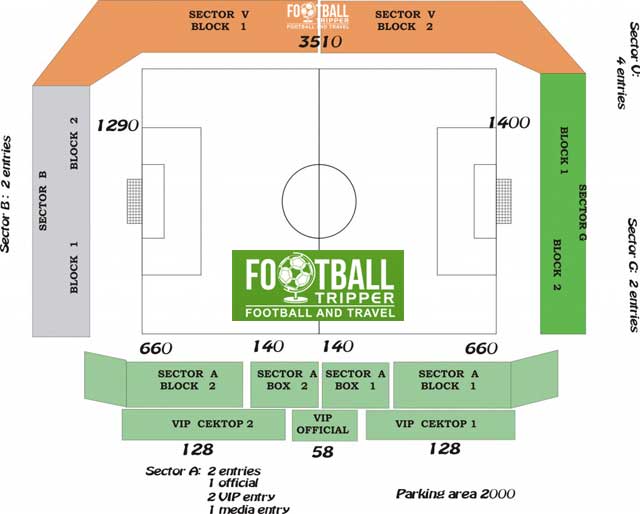 How to get to Lovech Stadium

Where is Lovech Stadium?

Who plays at Lovech Stadium?

Bulgarian side Litex play their home matches at Lovech Stadium.

What is the capacity of Lovech Stadium?

As of 2023 Lovech Stadium has an official seating capacity of 8,100 for Football matches.

When was Lovech Stadium opened?

Lovech Stadium officially opened in 1962 and is home to Litex

Covid Restrictions may be in place when you visit Lovech Stadium in 2023. Please visit the official website of Litex for full information on changes due to the Coronavirus.