Cluj Arena is a multi-purpose stadium located in Romania’s second most populous city after Bucharest, Cluj-Napoca. Constructed between 2009 and 2011 at a reported cost of €45,000,000, it is home to Romanian football team FC Universitatea Cluj.

The inaugural friendly match at Cluj Arena was held on the 11th October 2011 between Universitatea Cluj and Kuban Krasnodar, with the first competitive match held a week later against FC Bra?ov. Designed by Romanian architects Dico si Tiganas with sweeping lines, the stadium cost an estimated €45 million euros to build and took approximately 2 years to build in total.

Cluj Arenawas was constructed on the site of the former Stadionul Ion Moina which was demolished on 20th November 2008. Dating as far back as 1911 when it first opened with a match against Galatasaray, the stadium peaked with a 28,000 capacity in the 1960s however the two of the stands were deemed structurally unsafe in 2000, and facilities were lagging behind the rest of Europe’s footballing arenas.

Whilst the original ground was named after Ion Moina who was a famous athlete of the era, fans of U Cluj proposed that the new stadium should named after Mircea Luca who is one of the club’s most iconic players. The local municipal instead opted to call it the Cluj Arena as they believed that it would be a more enticing prospect for advertisers if there was no history to usurp.

Whilst Cluj Arena was under construction Universitatea temporarily relocated to Clujana Stadium between 2008-2010, and then at the start of the 2010/2011 season moved between three stadiums whilst the finishing touches were being put to their new ground.

During the 2013/2014 season Pandurii Târgu played their home matches of the Europa league at Cluj Arena. Reaching the group stages, Pandurri were drawn against Dnipro Dnipropetrovsk, Fiorentina and Paços de Ferreira but failed to progress to the knock-out stages. This is the currently the highest level of football played at the new stadium.

Below is a seating plan of Universitatea Cluj's Cluj Arena: 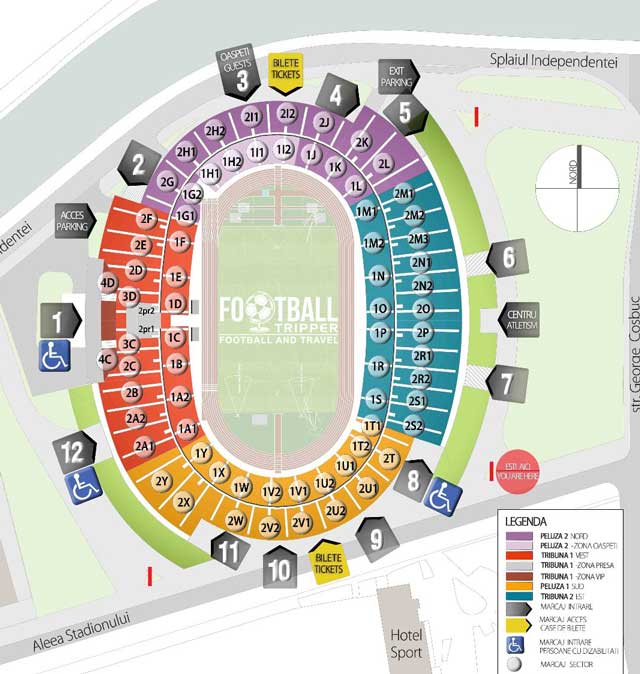 The Cluj Arena is comprised of four stands: North, East, South and West.

How to get to Cluj Arena

Where is Cluj Arena?

Who plays at Cluj Arena?

What is the capacity of Cluj Arena?

As of 2023 Cluj Arena has an official seating capacity of 30,335 for Football matches.

When was Cluj Arena opened?

Covid Restrictions may be in place when you visit Cluj Arena in 2023. Please visit the official website of Universitatea Cluj for full information on changes due to the Coronavirus.