Kuban Stadium is a multi-purpose stadium located in the city of Krasnodar. Home to two Russian Premier League clubs, FC Krasnodar and FC Kuban Krasnodar, it’s fair to say that the 31,654 capacity stadium has predominantly been used for football matches since opening back in 1961.

Located within the south-western city of Krasnodar, the stadium inherits its name from the Russian region of Kuban which borders the black sea. Constructed by the local municipal government back in 1961, Kuban Stadium opened on May 14th in time for the new season with long term tenants FC Kuban Krasnodar having occupied it ever since.

Initially known as Spartak Krasnodar, the inaugural match at the then 20,000 capacity ground was held against FC Spartak Stavropol. With football continuing to grow in popularity, later a new second tier was added to both of the main stands with the capacity essentially doubling to around 40,000 seats.

Reduced to today’s capacity of 31,654 after ever developing UEFA Regulations regarding spectator safety, local side FC Krasnodar also began to use the stadium in 2009 after a rapid ascent up the Russian Football League pyramid culminating in promotion to  the Russian Premier League in 2010 after FC Saturn and FC Moskva rejected their place in the league due to financial difficulties, with the latter eventually folding.

As for the future of Kuban Stadium it appears as if Kuban Krasnodar will continue to use it for the foreseeable future whilst rivals FC Krasnodar have begun to construct their own state of the art stadium. Not expected to be part of the 2018 World Cup, the new stadium is expected to have a 36,260 capacity with the €200 million euro project expected to be carried out by British and German architects.

Below is a seating plan of Kuban's Kuban Stadium: 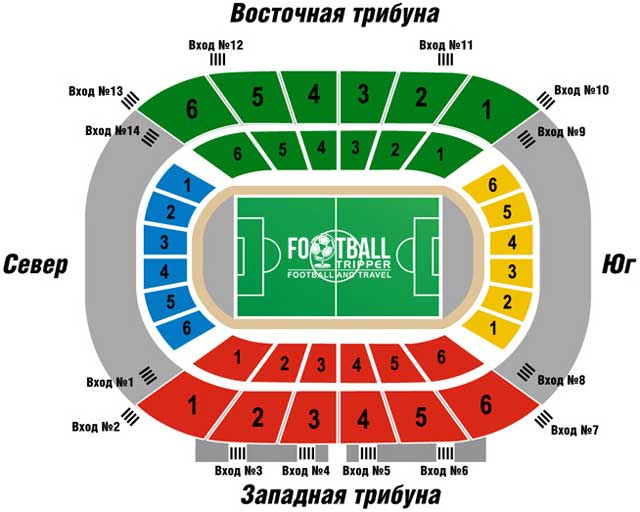 How to get to Kuban Stadium

Where is Kuban Stadium?

Who plays at Kuban Stadium?

Russian side Kuban play their home matches at Kuban Stadium.

What is the capacity of Kuban Stadium?

As of 2022 Kuban Stadium has an official seating capacity of 31,654 for Football matches.

When was Kuban Stadium opened?

Kuban Stadium officially opened in 1961 and is home to Kuban

Covid Restrictions may be in place when you visit Kuban Stadium in 2022. Please visit the official website of Kuban for full information on changes due to the Coronavirus.