Olimp-2 is the obscure and mysterious name of a football stadium located in the port city of Rostov-on-Don. Originally constructed in the 1930s and known back then as Rostselmash Plant Stadium, the current capacity today stands at 15,840 and it is the home of local team FC Rostov.

Stadion Olympus-2 first opened in 1930 under the name of Rostelmash Plant Stadium and has since undergone several redevelopments, with the present iteration bearing little resemblance to the original design. Initially opening as a multi-purpose sports venue complete with athletics track, the municipally owned stadium now appears to be purpose-built for football with decent sight lines from the stands.

At the grounds peak in the 1950s when it was known as Rostselmash Stadium, it was capable of welcoming over 32,000 supporters across four stands. The two stands along the lengthways of the pitch consisted of two-tiers but after they were removed  after a reconfiguration in 2000, the Olimp Stadion 2’s current capacity sits at an estimated 15,840.

The remodeling which occurred at the turn of the millennium also saw the West stand brought closer to the pitch in a move which has proven to be popular with football fans visiting the stadium. Later in 2009 the South Stand was complete rebuilt giving the overall ground a much more contemporary feel in addition to the installation of a new state of the art video screen a year later.

In May 2010 in an unprecedented move Rostov’s stadium hosted the final of the Russian Cup which marked the first time it was held outside the nation’s capital city of Moscow.  Zenit St Petersburg lifted the trophy after defeating FC Sibir Novosibirsk by a single goal to nil. Before this the biggest match held at the ground was arguably the 1999 Intertoto Cup Semi-final against Juventus or the 2015 Europa League play off against Trabzonspor.

Below is a seating plan of Rostov's Olimp 2 Stadion: 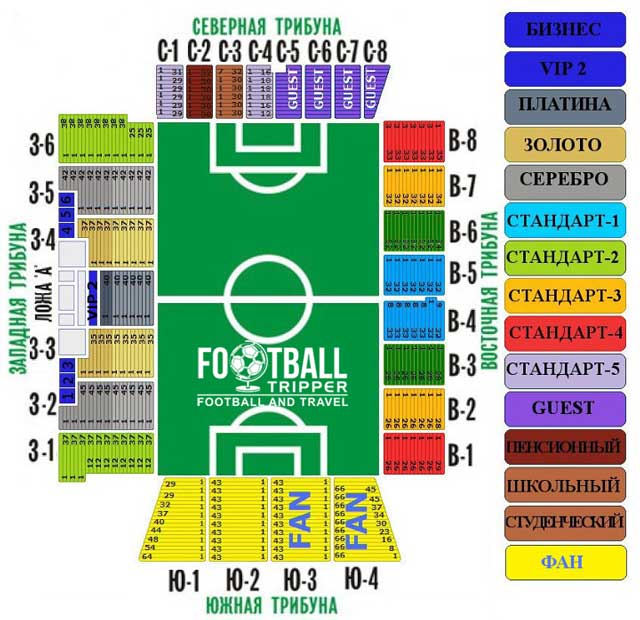 How to get to Olimp 2 Stadion

Where is Olimp 2 Stadion?

Who plays at Olimp 2 Stadion?

Russian side Rostov play their home matches at Olimp 2 Stadion.

What is the capacity of Olimp 2 Stadion?

As of 2023 Olimp 2 Stadion has an official seating capacity of 15,840 for Football matches.

When was Olimp 2 Stadion opened?

Covid Restrictions may be in place when you visit Olimp 2 Stadion in 2023. Please visit the official website of Rostov for full information on changes due to the Coronavirus.