Kazan Arena is the name of a new purpose built football stadium located in the capital city of Tatarstan, Kazan. Currently used by Russian Premier League side Rubin Kazan, the 45,105 capacity stadium was built in anticipation of both the Russian hosted 2018 FIFA World Cup and to a lesser extent the 2017 Confederations cup.

Kazan Arena opened in July 2013 in time for the Summer Universiade Athletics Championship after a construction period of over three years, with the first ceremonial stone laid by Prime Minister Vladimir Putin on May 2010.

The inaugural football match of resident team FC Rubin Kazan was held against Lokomotiv Moscow, and the stadium will be used for the Confederations Cup in preparation for the 2018 World Cup which will be held a year later.

Designed by architects Populous who famously designed England’s Wembley Stadium, Lyon’s Stade des Lumières and FNB Stadium for the South African World Cup in 2010.Reportedly the Kazan Arena’s graceful form of the stadium was envisioned as a modern day water lily adorning the banks of the nearby Kazanka River.

The Stadium itself was conceived with an initial budget of around 132 million euros but construction costs were said to triple to an estimated 465 million. Constructed with a capacity of 45,105 with state of the art facilities such as the largest exterior LED in the world you could argue that the projected costs were grossly optimistic to begin with.

The new ground essentially replaces the municipally owned Central Stadium of Kazan which was constructed in 1960. Tenants FC Rubin Kazan moved into the stadium in time for the 2015 season, with the club set to become long term occupants of the Arena which will primarily host football matches of the Russian Premier League.

Below is a seating plan of FC Rubin Kazan's Ak Bars Arena: 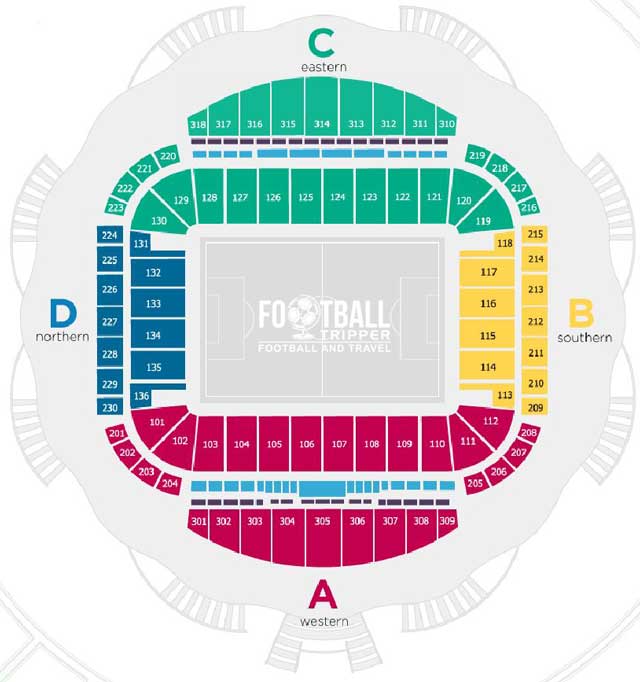 The Kazan Arena is comprised of four stands: North, East, South and West.

We will update with information away fans as soon as we get access to this information from the operators of the website.

Your options when it comes to eating and drinking are limited once you’re at Kazan Arena, although you will encounter the expected range of kiosks – not that they generally have a great range in Russia.

Rubin Kazan’s stadium shop is located within the eastern stand of the Arena. It is usually open seven days a week from 10.00 am to 8.00 pm if Rubin’s online store is to be believed.

Tours of Kazan Arena are available for the bargain price of 300 rubles per adults, and 150 rubles for everyone else. Tickets for the 60 minute tour can be purchased on the day of the tour by visiting the ticket windows, however group tours must be booked at least 3 days in advance.

Tickets to see Rubin Kazan play at home can be purchased online providing you are comfortable with navigating a Russian language page (Tip: Use Google Chrome), or in person from the ticket office before kick-off assuming the match hasn’t sold out.

How to get to Ak Bars Arena

Where is Ak Bars Arena?

Depending on what you define as the city centre, Kazan Arena is anywhere between 6.6 – 5.0km away. Situated next to the Kazanka River it is located towards the eastern side of the city.

Located out of town there are a half a dozen or so official carparks located around the stadium for use on matchdays.

Kazan International Airport is located 30km southeast of the city centre and can be reached in around 20 minutes by taxi for around 600 rubles.

There is also the Aeroexpress train service which takes you to Kazan Station for 200 rubles however it is very infrequent, reportedly only departing every 90 minutes or so which means for many Football Trippers it is impractical.

The majority of accommodation options sit south-west of the stadium across the other side of Kazanka River. Familiar names such as Park Inn by Radisson and Hotel Ibis are well located and reasonably priced for most Football Trippers, however they are by no means the cheapest option in the city.

Who plays at Ak Bars Arena?

What is the capacity of Ak Bars Arena?

As of 2023 Ak Bars Arena has an official seating capacity of 45,379 for Football matches.

When was Ak Bars Arena opened?

Covid Restrictions may be in place when you visit Ak Bars Arena in 2023. Please visit the official website of FC Rubin Kazan for full information on changes due to the Coronavirus.