Lokomotiv Stadium is a 28,000 capacity purpose built football stadium located in Russia’s capital city of Moscow. Home to Russian Premier League side FC Lokomotiv Moscow, the 2002 constructed ground was also used for qualification matches of the 2010 World Cup by the Russian National Team.

Lokomotiv Stadium is a football ground located in Russia’s capital city of Moscow which dates back to the early part of the 20th century when it first opened as “Stalinest Stadium” in 1935. Rebuilt twice since first opening, the current stadium bears little resemblance to the original incarnation and was most recently renovated between 2000-2002 resulting in the current capacity of 28,800.

The first major renovation occurred in the 1960s when the “Stalinets Stadium” was demolished and completely rebuilt as a dedicated football ground minus the problematic athletics track. Resident team Lokomotiv Moscow took on Ukrainian giants Dynamo Kiev in the inaugural fixture and soon found themselves competing in the European Cup after defeating Swiss side FC Sion in the a qualifier.

It was during this period that Lokomotiv Stadium rose to prominence as one of the country’s most favourite football stadiums, and began to host matches of the Russian National Team. This trend continues post-millennium when Lokomotiv’s stadium became the home ground for all the successful qualification campaign of the South African hosted 2010 Fifa World Cup.

Unfortunately it doesn’t appear as if Lokomotiv Stadium will be involved in the 2018 Word Cup as the capacity falls short of Fifa’s recommended size of 40,000. The $30 Million worth of renovations in 2002 temporarily made the stadium one of the most modern grounds in Russia, but it has since been eclipsed by other Moscow based grounds such as Luzhniki Stadium and Spartak’s Otkrytie Arena.

Below is a seating plan of Lokomotiv Moscow's RZD Arena: 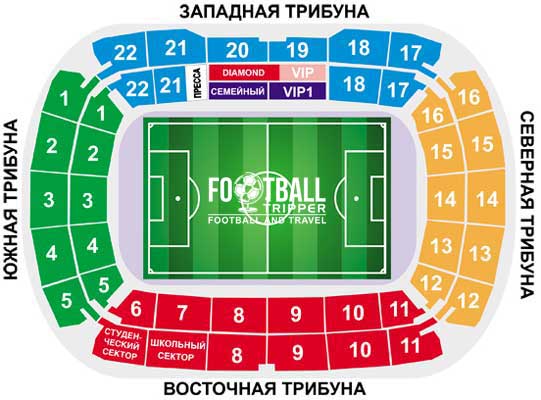 How to get to RZD Arena

Where is RZD Arena?

Who plays at RZD Arena?

What is the capacity of RZD Arena?

As of 2023 RZD Arena has an official seating capacity of 27,084 for Football matches.

When was RZD Arena opened?

What is the postcode for RZD Arena?

Covid Restrictions may be in place when you visit RZD Arena in 2023. Please visit the official website of Lokomotiv Moscow for full information on changes due to the Coronavirus.