Arsenal Stadium is a purpose built football stadium located in the industrial city of Tula towards the European side of Russia.

Constructed back in 1959, the current stadium has a capacity of 20,048 and is home to Russian Premier League side FC Arsenal Tula.

Central Stadium Arsenal first opened in 1959 under the name of Stadion Tula Luzhniki which literally translates as “Tula Meadows”, similar to the name of Russia’s National Stadium which is located in the country’s capital city, Moscow. It was later renamed in honor of the 50th Anniversary of The Communist Union of Youth (Komsomol) and Communist Revolution Leader Vladimir Lenin.

Completely renovated in the 1990s in  order to satisfy UEFA’s increasingly stringent stadium safety legislation after a two high-profile Stadium disasters across Europe in the 1980s, Arsenal Stadium underwent large scale modernisation which included the addition of under-soil heating, improved irrigation system, lighting and modern plastic seating which is much more comfortable for spectators.

The one negative which remained after the work was that the athletics track around the perimeter of the pitch was retained however as a multi-purpose sports venue owned by the Tula Municipal Government it was perhaps inevitable that this feature would stay. To date Arsenal Tula’s stadium is yet to host European Football via a UEFA Sanctioned competition as the club have failed to qualify via the Russian Premier League.

Arsenal Stadium did however welcome English side Southend United for a preseason match back in July 1971 with the Central Stadium also hosting a single International Friendly to date. Russia took on Belarus in a friendly match which ended in a 1-1 draw which attracted over 13,000 fans into the mid-sized stadium – about 65% full.

Below is a seating plan of Arsenal Tula's Arsenal Stadium (Tula): 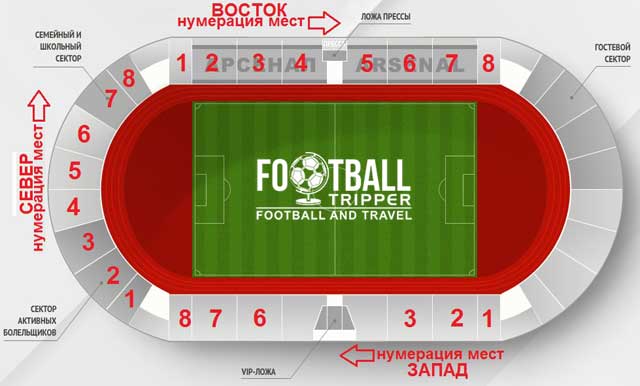 How to get to Arsenal Stadium (Tula)

Where is Arsenal Stadium (Tula)?

Who plays at Arsenal Stadium (Tula)?

What is the capacity of Arsenal Stadium (Tula)?

As of 2023 Arsenal Stadium (Tula) has an official seating capacity of 20,048 for Football matches.

When was Arsenal Stadium (Tula) opened?

What is the postcode for Arsenal Stadium (Tula)?

Covid Restrictions may be in place when you visit Arsenal Stadium (Tula) in 2023. Please visit the official website of Arsenal Tula for full information on changes due to the Coronavirus.