The Luzhniki Stadium located within the Luzhniki Olympic Complex in Moscow, is the home ground of the Russian Football team. First opened in 1956, the current capacity is 78,360 with renovations set to take place for the 2018 World Cup.

Named after the Olympic Sports Complex in Moscow which it resides in, Luzhniki Stadium literally translates as “The Meadows” with the name derived from the natural area of wetland created by the bend of the Moskva River. Formerly known as Central Lenin Stadium between 1956 – 1992, Luzhniki was formerly the national stadium of the Soviet Union and today is the national stadium of Russia itself.

Constructed as a multi-purpose sports venue complete with athletics track around the perimeter of the pitch, Luzhniki is primarily used for football matches and is currently being renovated in time for the 2018 World Cup where it will be country’s centrepiece of the tournament. With a capacity of 81,000 it is the largest football ground in the country ahead of the newly constructed Otkrytie and Kazan Arenas.

Russia’s national Stadium is famous for being one of the few major stadiums in Europe to use an artificial playing surface with FIFA approving the use of synthetic fibres in 2002 due to the cold Russian Winters making it impossible to cultivate a high-quality playing surface on a consistent basis. Natural grass was however installed for the 2008 Champions League Final between Manchester United and Chelsea at the request of UEFA.

Fans across Europe may also remember the stadium for hosting the 1999 UEFA Cup final between Marseille and Parma which the iconic Italian side won  three nil, and after Luzniki hosts the World Cup is over it will be one of four stadiums in the world which will have hosted the World Cup Final as well as the Champions League Final and Summer Olympics with Moscow hosting the global Athletics event in 1980.

Below is a seating plan of Russian National Team's Luzhniki Stadium: 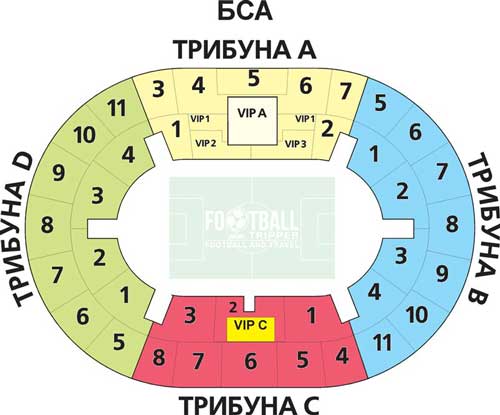 When Newcastle United took on Anzhi Makhachkala in a Europa League match back in March 2013 the brave away fans who made the trip were housed within the south-west corner. Although it appears as if less than 100 made the trip, the theoretical allocation for away fans is easily a few thousand tickets.

The sale of alcohol inside the stadium is usually prohibited during International and UEFA sanctioned matches which means you will likely want to drink a few pints centrally before hopping on the metro.

Whilst there isn’t an football store at the stadium the streets around Luzhniki are usually lined with vendors selling a mixture of official and unofficial merchandise before kick-off.

It doesn’t appear as if tours of Luzhniki are currently available however this may change in coming years in the lead up to, and after the 2018 World Cup.

Whether you’re hoping to watch your country or your team at the Luzhniki, you should always purchase away tickets in advance of the match. Typically your club’s official website will have all of the relevant ticketing information for Champions/Europa League Matches, and your football association will have it covered for Internationals.

If Russian Teams are playing domestic matches at Luzhniki Stadium then there’s a strong possibility that you can pick up tickets before kick-off as the large capacity is rarely sold out.

How to get to Luzhniki Stadium

Where is Luzhniki Stadium?

The stadium sits within Luzhniki Sports Complex located within the northern bank of the Moskva river approximately 6.5 km south-west of Moscow’s most central point.

In order to gain entry to the sports complex you must pay a fee of 100 rubles, however once you are in on-site parking is free between 7.00 am – 11.00 pm. Overnight parking is available for 500 rubles.

The easiest and most popular way of travelling to Luzhniki is undoubtedly via Moscow’s Metro system. The nearest stop “Sportivnaya” or ?????????? in Russian sits the Sokolnicheskaya Line which is informally known as Line 1: Red.

We recommend catching it from the “Lubyanka” station in the city centre which is less than five minutes away from Red Square.

As Russia’ capital and largest city by population, Moscow is served by no less than four international airports, however Sheremetyevo is the most commonly used. This airport handles 60% of all international flights which means there’s a strong possibility that you will land here.

Upon landing you can catch an express train service into the city centre.

There are a number of places to stay within a five minute radius of Luzhniki Sports Complex such as the Yunost, the blues Hotel, and Mosfilm however it’s fair to say that none of these are located within the most liveliest of areas.

As a result you’ll probably have a more enjoyable trip if you book something within the city centre where you will find an abundance of choice including familiar western names such as Hotel Ibis, Radisson and four Holiday Inns.

Who plays at Luzhniki Stadium?

What is the capacity of Luzhniki Stadium?

As of 2022 Luzhniki Stadium has an official seating capacity of 78,011 for Football matches.

When was Luzhniki Stadium opened?

What is the postcode for Luzhniki Stadium?

The postcode for Luzhniki Stadium is 119048.

Covid Restrictions may be in place when you visit Luzhniki Stadium in 2022. Please visit the official website of Russian National Team for full information on changes due to the Coronavirus.