Dynamo Stadium is a multi-functional stadium located in the capital city of the Republic of Bashkortostan, Ufa. Predominantly used for football matches by F.C Ufa who occasionally feature in the Russian Premier League, the ground has a capacity of 4,500 and was most recently renovated back in 2007.

Dynamo Stadium is a small, multi-purpose sports venue dating back to the first half of the 20th century which is temporarily being used by F.C Ufa whilst renovations are being carried out on their usual home, “Oilman Stadium”.  The club purchased “Oilman” from the local Ufa Government in 2012 and currently have plans to construct a modest, 16,000 capacity ground at the current site.

Officially founded on the 23rd December 2010,  FC Ufa face a unique stadium crisis as they have  outgrown their home after rapidly rising to to the Russian Premier League in under 4 seasons. Starting out in the bottom tier of the Football Pyramid, the club earned promotion to the top-flight in their second attempt during the 2013-2014 season after finishing fourth and winning the subsequent play-offs.

Naturally,the club’s infrastructure has been unable to keep pace with the rapid rate of progress and the relocation to Dynamo Stadium is seen as a temporarily solution. The 4,500 capacity ground is the smallest stadium heading into the 2015 Russian Premier League season, with the next largest stadium, Mordovia’s Start, being more than double in size to put Dynamo into perspective.

With the new stadium estimated to be complete in May 2015, FC Ufa will have to make do with the ageing Dynamo Stadium. Complete with a running track around the perimeter of the pitch and without the expected technology of other modern football stadiums, the venue is very much of the old school variety and is a relic from a by-gone sporting era.

Below is a seating plan of F.C. Ufa's BetBoom Arena: 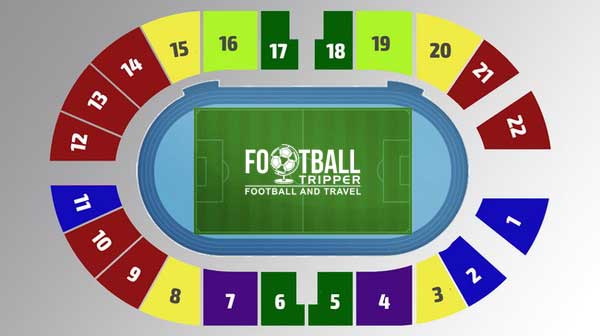 How to get to BetBoom Arena

Where is BetBoom Arena?

Who plays at BetBoom Arena?

What is the capacity of BetBoom Arena?

As of 2023 BetBoom Arena has an official seating capacity of 15,132 for Football matches.

When was BetBoom Arena opened?

BetBoom Arena officially opened in 1967 and is home to F.C. Ufa

What is the postcode for BetBoom Arena?

Covid Restrictions may be in place when you visit BetBoom Arena in 2023. Please visit the official website of F.C. Ufa for full information on changes due to the Coronavirus.