Zvezda Stadium formerly known as the Lenin Komsomol Stadium is a multi-purpose sports arena located in the Russian city of Perm. Home to local team FC Amkar Perm, the 17,000 capacity ground first opened in 1969 and in 2005 a decision was made to convert the grass to artificial turf.

Zvezda, “Star” Stadium, is a multi-purpose sports arena which first opened on the 5th June 1969, initially known as “The Lenin Komsomol” in honour of both the former Leader and The Communist Union of Youth Movement. By the 1990s the political landscape had shifted to the right and once heralded Communist figures were becoming less popular with the renaming of Leningrad to St Petersburg being perhaps one of the most high profile examples of this.

Similarly, Amkar Perm’s home ground was renamed to “Zvezda Stadium” and after the 1985 facelift, the 17,000 capacity venue almost took on a new identity. Whilst traces of the Athletics track remained with a slightly longer distance between the stands and the pitch than newer venues, the running track was removed and colourful yellow and red seats helped forge a new identity for the aging set of facilities.

After finishing a record fourth in the Russian Premier League during the 2008 season Amkar earned the right to participate in the Europa Laeague and UEFA subsequently inspected the stadium, awarding it an official rating of 2 stars. This permitted the ground to host International Matches as well as games up to the quarter finals of both the Europa and Champions League Competitions.

Unfortunately, FC Amkar Perm failed to qualify for the group stages of the tournament after they were drawn against London based team, Fulham F.C. Coming close, Amkar Perm won the first leg at home 1 nil but lost 3-1 in the return fixture at Craven Cottage and subsequently lost on aggregate. To date an International match has yet to be held at the former Lenin Komsomol stadium.

Below is a seating plan of Amkar's Zvezda Stadium (Perm): 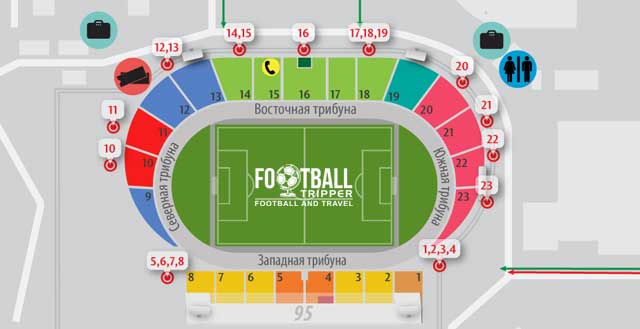 How to get to Zvezda Stadium (Perm)

Where is Zvezda Stadium (Perm)?

Who plays at Zvezda Stadium (Perm)?

What is the capacity of Zvezda Stadium (Perm)?

As of 2023 Zvezda Stadium (Perm) has an official seating capacity of 17,000 for Football matches.

When was Zvezda Stadium (Perm) opened?

Covid Restrictions may be in place when you visit Zvezda Stadium (Perm) in 2023. Please visit the official website of Amkar for full information on changes due to the Coronavirus.