Start Stadium is a purpose built football ground located in Saransk, Russia. First opened in 2004, the arena has a capacity of 11,613 and is currently used by local team FC Mordovia Saransk who bounce between the Russian Premier League and the National Football League.

Stadium Start is a multi-purpose sports venue located within a wider sports complex within the city of Saransk which is the capital of the Mordovia region in Russia. Constructed in 2004 after the demolition of the former “lightning” stadium at the same site, Start Sports Complex boasts over 4 football pitches, and a variety of facilities including tennis, volleyball and basketball courts as well as a state of the art Gym.

Home to FC Mordovia Saransk who are one of the smaller clubs currently competing within the Russian Premier League, Start Stadion’s capacity is currently set at an estimated 11,613 which is the second smallest heading into the start of the 2015 season, behind FC Ufa’s Dynamo Stadium which has a capacity of 6,000.

The future of Start Stadium has been called into question ever since Russia launched their bid to host the 2018 World Cup. The City of Saransk was included as one of 11 cities provisionally set to host matches, but with FIFA requirements setting a minimum capacity of 40,000 per ground, it was evident that a new stadium would need to be built for the tournament.

Known as Yubileyniy Stadium, construction on the $300 million project began in 2010 and is expected to be completed by 2016. Currently FC Mordovia Saransk are expected to relocate to the stadium but with a planned capacity of around 45,000, it may prove to be too large for the club and they may well end up back to the Star Stadion if attendances are especially low.

Below is a seating plan of Mordovia's Start Stadion (Saransk): 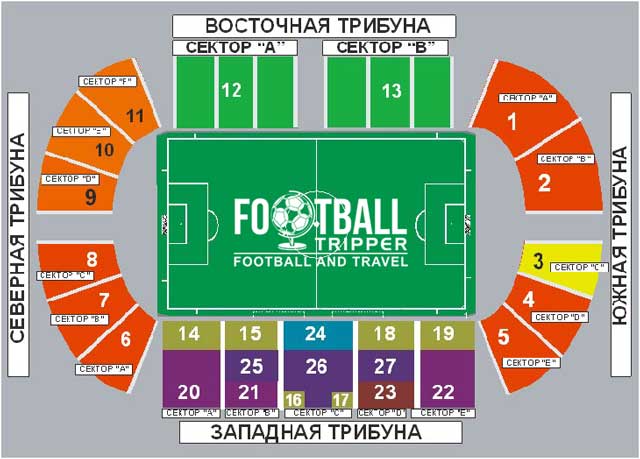 How to get to Start Stadion (Saransk)

Where is Start Stadion (Saransk)?

Who plays at Start Stadion (Saransk)?

What is the capacity of Start Stadion (Saransk)?

As of 2022 Start Stadion (Saransk) has an official seating capacity of 11,613 for Football matches.

When was Start Stadion (Saransk) opened?

Covid Restrictions may be in place when you visit Start Stadion (Saransk) in 2022. Please visit the official website of Mordovia for full information on changes due to the Coronavirus.