Located in Khimki city within the greater area of Moscow Oblast, the stadium has a capacity of 18,636 and first opened in 2008.

Arena Khimki is a football stadium which is regularly used by Football teams in Russia but very rarely loved, as seemingly no club wishes to make it their permanent home. Constructed over a three year period between 2005-2008, the ground was expected to become the home of FC Khimki (hence the name), but a year after moving in the club succumbed to relegation during the 2009 season and opted to relocate back to the smaller Rodina Stadium.

With a capacity of 18,636, a recent construction date and the bonus of no running track, the stadium which falls within the Moscow Region, didn’t take too long to find a new tenant with Dynamo Moscow opting to move in as their Dynamo Stadium was demolished. After assessing the viability of renovations in 2007, the club have decided to build a brand new stadium called the VTB Arena was included in the country’s  World Cup bid.

Since 2010 local neighbours CSKA Moscow have also opted to use the ground as their current stadium at the time had a capacity of just 4,600. Unlike Dynamo, CSKA appear to have a long term strategy in place, with the club currently constructing a brand new stadium named after former striker Grigory Fedotov. Expected to be complete in 2015 with a capacity of 30,000, the stadium is unlikely to be used for the 2018 World Cup.

As for the future of Arena Khimki, it’s hard to guess it’s long term plans for the stadium as there doesn’t appear to be a team who will occupy it beyond 2018, assuming of course that original tenants, FC Khimki, do not return to the top flight of Russian footballer. Still, it’s hard to believe that a 2008 built stadium will be simply abandoned – we’re waiting for more information to be released before speculating further.

Below is a seating plan of FC Khimki's Arena Khimki: 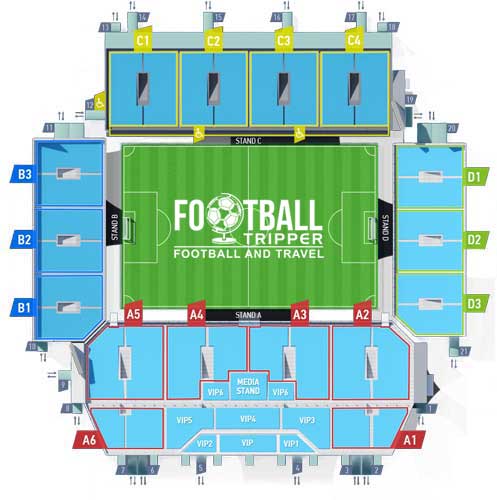 When PSV Eindhoven took on Dinamo Moscow on 2nd October 2014 in the Europa League, the Dutch club were given a ticket allocation of 2,660 which equates to around 14.3% of the total seats in the Khimki Arena.

Unfortunately we are unsure whether or not this figure is typical for European matches, the Champions League or when CSKA Moscow are instead at home.

There really isn’t much in the way of drinking options within the district of Khimki, you’re better off drinking before and after in the more tourist friendly city centre.

Whilst both Moscow clubs operate Merchandising kiosk as Khimki Arena on matchdays, the two teams actually have their own stores located away from the stadium in different parts of the city.

Tours of Arena Khimki and the other sports facilities within the complex are available to tourists and football fans providing they book via email up to five days before the desired date.

How to buy FC Khimki Tickets

For the majority of games tickets can be purchased on the day of the match either on the turnstile or from the ticket box office near entrances 3 and 4 at the stadium a few hours before kick-off.

The below prices are based on CSKA’s  2015 Champions League qualifier against AS Sparta and are likely to be much cheaper for Russian Premier League matches. At the time of writing, 1000 rubles = 16.21 euros.

Stand B and D

Naturally for the high-profile European matches such as the Champions League, the game will likely be an all-ticket event due to the high levels of demand. The above applies to matches of both CSKA and Dynamo Moscow.

How to get to Arena Khimki

Where is Arena Khimki?

The football stadium is located 20.7km north-west of Moscow’s historic city centre within the suburb of Khimki which it inherits its name from.

There’s no official information regarding parking, thankfully however it’s very unlikely that most readers will even contemplate driving!

The district of Khimki is served by it’s own railway station which can be reached from Leningradskiy Station in the centre of Moscow. The journey will take anywhere between 30-40 minutes, and after departing the commuter train you will have a walk of around 10 minutes south to Arena Khimki.

Whilst there is a metro system which serves the city of Moscow, the final stops on both the Green and Purple lines fall well short of the Khimki District which means the distance is probably too large to walk for the average football fan who doesn’t speak Russian!

As Russia’ capital and largest city by population, Moscow is served by no less than four international airports, however Sheremetyevo is the most commonly used. This airport handles 60% of all international flights which means there’s a strong possibility that you will land here.

Situated within a sleepy residential area there isn’t much in the way of overnight accommodation within the immediate vicinity of Arena Khimki. Subsequently you’ll have a much better trip if you get the train back to the city centre where you have more options and can enjoy the night-life.

Who plays at Arena Khimki?

What is the capacity of Arena Khimki?

As of 2023 Arena Khimki has an official seating capacity of 18,636 for Football matches.

When was Arena Khimki opened?

What is the postcode for Arena Khimki?

Covid Restrictions may be in place when you visit Arena Khimki in 2023. Please visit the official website of FC Khimki for full information on changes due to the Coronavirus.