Originally known as Letná Stadium or Letenský Stadion, the home venue of famous First League team AC Sparta Prague, it is technically called Generali Arena after a sponsorship agreement was reached in 2009.

With a capacity of 19,416, Sparta Prague’s home is the second largest in the Czech First League.

Stadion Letná first opened in 1921 but had to be completely rebuilt less than 15 years later when the main stand burned down in 1934, which prompted the construction of a brand new concrete grandstand shortly after.

By 1969 all of the remaining wooden stands had been replaced and the ground’s largest capacity was reached. The highest attendance to date occurred when 34,000 fans saw Czechoslovakia defeat Switzerland in a qualifying match for the 1990 World Cup.

After the dissolution of Czechoslovakia, the stadium continues to host important International matches, with Stadion Letná regarded as the country’s national stadium.

It regularly hosts around 40% of home matches compared to the second most used stadium, FK Teplice’s Na Stínadlech which statistically has hosted almost half as much as Sparta Prague’s ground.

The most significant renovation to date came in 1994 when Letná was closed for 9 months to undergo a conversion to all-seating with the stands also repositioned after the athletics track was removed.s.

2001 saw the home side temporarily relocate to Stadion Evžena Rošického which belonged to rivals Slavia Prague as new under-soil heating was installed in addition to an improved irrigation system and grass directly from Germany.

As regulars in the Champions League, fans across Europe are familiar with Sparta Prague, with the 2003/2004 defeat to  AC Milan in the quarter finals perhaps the most famous campaign.

Below is a seating plan of Sparta Prague's Generali Česká pojišťovna Arena: 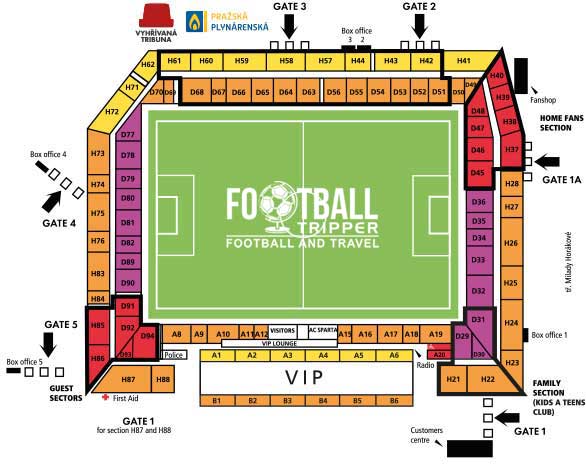 The Generali Arena is comprised of four stands: North, East, South and West.

Travelling supporters are housed within the north-west corner of Letná stadium between the main stand to the west, and the northernmost goal-end in sections H85, H86, D91, D92, D93 and D94.

For Czech First League matches tickets for the away section can be purchased for up to three hours before kick-off from box office 5 which is located just outside the entrance to the “Guest Sector”. Single tickets cost 170 CZK which equates to a bargain 6.5 euros.

Sparta Praha operate a fan shop at Generali Arena on the corner of Milady Horákové street and U Sparty Street (south-east), in addition to their official online store known as Fan Shop Sparta.

As far as we know, there currently aren’t any public tours available of Genarli Arena. However if Sparta Prague ever chance this situation in the future we’ll be sure to update this section.

How to buy Sparta Prague Tickets

Tickets to see AC Sparta Prague can be purchased from the stadium’s box offices (1-4) for up to three hours before the start of every domestic match, or if they prefer, online from the club’s website. Note: 300 Czk – 11.10 Euros at the time of publication.

Please refer to the above seating plan in order to fully understand where each section is located in relation to the pitch. For more information feel free to phone the club’s customer service on +4206 296 111 400 or send an email to [email protected]

How to get to Generali Česká pojišťovna Arena

Where is Generali Česká pojišťovna Arena?

Generali Arena is situated within the Letná district of Prague which is where the stadium’s original name was derived from. Still commonly referred to by fans as Stadion Letná, the hilly area just under 4km north of the historic city centre.

Located just north of Letna Park and within a dense residential area parking options are rather limited. You’re probably best off finding a parking garage back towards the city centre, and catching some form of public transport.

The main railway station in Prague is known locally as “Praha hlavní nádraží”, and it forms part of European Rail Network which means you can get to Berlin and Vienna in just under five hours.

National services operated by ?eské dráhy (Czech Railways) which means you can travel around the country in next to no time on on high-speed services.

Prague is blessed with an expansive metro system, and generally speaking this is the easiest way to travel around the city. The two nearest stops are located either side of Letna Park, and will leave you with a 5-10 minute walk.

The city is served by Václav Havel Airport Prague which is located 10km west of the historic centre. Equipped with three large terminals for public use, the International airport has flights to and from most European countries which mean its a popular tourist destination.

Upon landing you can catch a bus/shuttle service which will take you to Prague city centre in around 30 minutes.

North of the river and fairly close to the stadium there is the likes of Art Hotel Prague, Hotel Letna, and Parkhotel which are all reasonable priced. Back towards the city centre you have much more more variety with familiar chains such as Ibis, Hilton and Jurys Inn all closely situated to the station.

What is the capacity of Generali Česká pojišťovna Arena?

As of 2023 Generali Česká pojišťovna Arena has an official seating capacity of 18,887 for Football matches.

What is the postcode for Generali Česká pojišťovna Arena?

The postcode for Generali Česká pojišťovna Arena is 170 82.

Covid Restrictions may be in place when you visit Generali Česká pojišťovna Arena in 2023. Please visit the official website of Sparta Prague for full information on changes due to the Coronavirus.