Eden Arena or Stadion Eden is a purpose built football stadium located in the Vršovice district of Prague – the capital city of the Czech Republic.

Formerly known as the Synot Tip Arena between 2008-2012, the 20,800 capacity ground is the home venue of Slavia Prague and often the National Football Team.

The original Eden Stadion first opened in the 1953 with a capacity of 50,000, however by the 1970s the wooden stands failed to provide adequate levels of comfort for those fans in attendance.

Restricted by the Government, building and financing a new stadium proved to be incredibly problematic until the late 1990s when the Communist Regime was finally toppled.

Slavia Prague encountered several false dawns whilst attempting to construct a new Eden Stadion including in 1989 when they temporarily relocated to Dolicek Stadium.

The Eastern stand was demolished seemingly signalling progress, until the club found themselves playing back there again the following season albeit with a much smaller capacity.

In 2000 after many years of literal red tape the local council finally transferred the ownership of the stadium over to Slavia Prague which finally gave the club the control they needed. At this point Eden Stadion has been deemed unusable by the Czech First League and Slavia moved back into Strahov Hill.

The new Eden Arena opened on 17th May 2008 with an inaugural match against Jablonec (2-2) after almost 40 years of trials and tribulations.

The previous ground was demolished in December 2003, and although plans were scaled down from the original 1.8 billion Koruna  to just over half the size, Slavia Prague persevered and now have one of the most modern grounds in Czech Republic.

Testament to this was the fact that it was nominated to host the first UEFA Super Cup final away from Stade Louis II – the competition’s home since 1998. Held on 30th August 2013  Bayern Munich took on Chelsea F.C in what was essentially a rematch of the 2012 Champions League Final. This time however it was the Germans who triumphed on penalties.

Below is a seating plan of Slavia Prague's Sinobo Stadium: 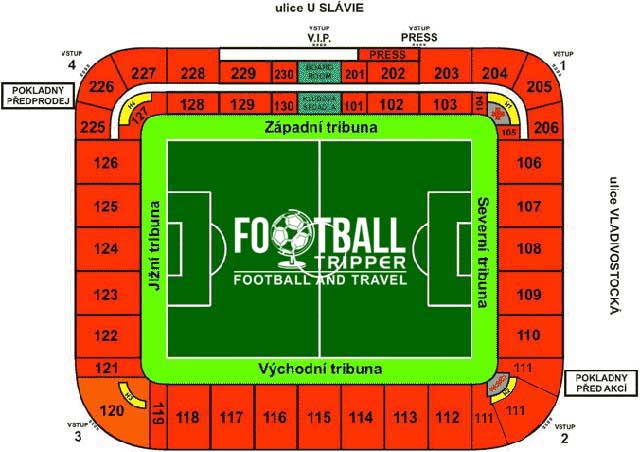 The Eden Arena is comprised of four stands: North, East, South and West.

How to get to Sinobo Stadium

Where is Sinobo Stadium?

Who plays at Sinobo Stadium?

What is the capacity of Sinobo Stadium?

As of 2023 Sinobo Stadium has an official seating capacity of 19,370 for Football matches.

When was Sinobo Stadium opened?

What is the postcode for Sinobo Stadium?

Covid Restrictions may be in place when you visit Sinobo Stadium in 2023. Please visit the official website of Slavia Prague for full information on changes due to the Coronavirus.