The Soccer City Stadium is a 94,736 capacity stadium in Johannesburg, South Africa, constructed for the 2010 World Cup tournament which the country hosted. Known informally as the The Calabash due to its resemblance to the African Pot, the stadium held the 2010 World Cup Final between Spain and Netherlands, and marked Nelson Mandela’s final public appearance.

First National Bank Stadium was designed as the main stadium and centrepiece of the 2010 World Cup which South Africa were elected to host. Constructed with a capacity of 94,736, FNB Stadium is the fourth largest football stadium in the world, behind Mexico’s Estadio Azteca (95,500) and just ahead of England’s Wembley Stadium (90,000).

Due to FIFA stadium requirements during the tournament, the capacity was scaled down to 84,490 as several sections of seating was converted to executive facilities, and the stadium was officially referred to as Soccer City. This was to ensure the sponsorship name didn’t conflict with any of the competitions official sponsors.

Constructed on the site of Nelson Mandela’s first speech after being released from prison in 1990, the stadium is steeped in South African history and was even used to host the great man’s memorial service on 10th December 2013. In spite of this connection, Port Elizabeth Stadium was named after Nelson Mandela instead.

Costing an estimated $440 million USD in 2009, it was designed by world-renowned stadium architects Populous who also had a hand in Estádio da Luz, and The Emirates. The iconic design of the ground was inspired by the oval shape of the African Pot and thus is informally referred to by fans as The Calabash.

In total, Soccer City Stadium hosted eight matches of the 2010 World Cup including the controversial final between Netherlands and Spain which was marred by thirteen bookings and one sending off. It also hosted the final of the 2013 African Cup of Nations between Nigeria and Burkina Faso, and is currently home to domestic side, Kaizer Chiefs F.C.

Below is a seating plan of Kaizer Chiefs's First National Bank Stadium: 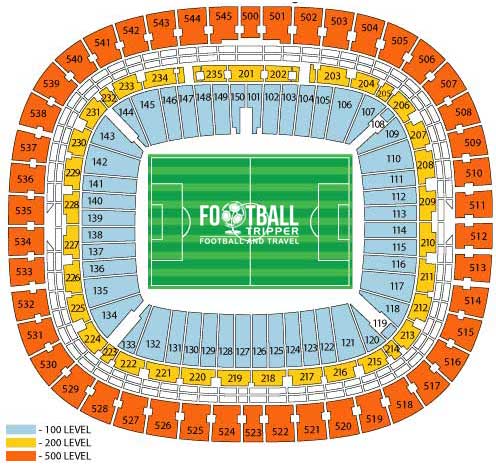 How to get to First National Bank Stadium

Where is First National Bank Stadium?

What is the capacity of First National Bank Stadium?

As of 2023 First National Bank Stadium has an official seating capacity of 94,736 for Football matches.

Covid Restrictions may be in place when you visit First National Bank Stadium in 2023. Please visit the official website of Kaizer Chiefs for full information on changes due to the Coronavirus.