Nelson Mandela Bay Stadium is a five tier, 48,459 capacity stadium lconstruced for the 2010 World Cup in South Africa. It is indirectly named after the immortal former South African President and anti-apartheid revolutionary.

When Port Elizabeth was chosen as one of nine host cites for the 2010 World Cup, there was lots of consideration as to how to deliver a world class stadium. At the time Port Elizabeth didn’t have its own purpose-built football ground, and the city’s largest facility, EPRU Stadium, was not only predominantly used for Rugby but simply outdated.

As football was underfunded during the era of Apartheid, the decision was taken to construct a brand new football stadium in the city of Port Elizabeth and help was sought from two groups of architects who provided the designs. Famed for its unique roof structure which resembles Petals from a flower, the stadium’s nickname as a result is The Protea.

Consisting of 46,000 seats, and an additional 4,000 temporary ones for the duration of the tournament, the stadium cost a total of $270 million USD. Regarded as one of the most beautiful in South Africa,  it overlooks two impressive bodies of water: the North End Lake and The Bay itself.

Hosting matches of the 2009 Confederations Cup as a curtain raiser to the World Cup, Nelson Mandela Bay Stadium hosted 8 matches of the tournament including the quarter final between Netherlands and Brazil. Three years later it was used as one of the venues for the 2013 Africa Cup of Nations, thus securing its post-World Cup legacy.

Below is a seating plan of Chippa United's Nelson Mandela Bay Stadium: 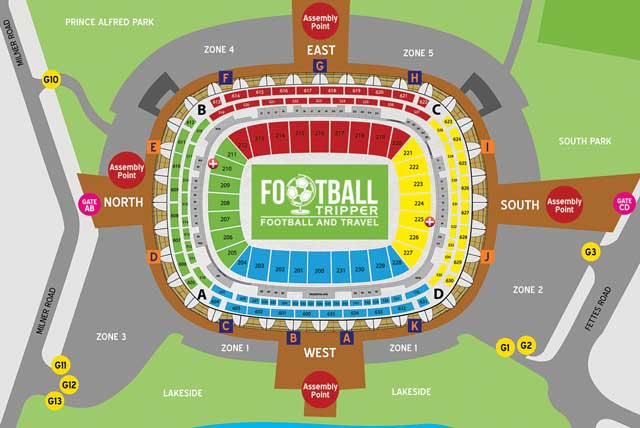