Cape Town Stadium is a 55,000 capacity stadium located in the second largest city of South Africa, Cape Town. Constructed for the 2010 World Cup which the country hosted, the stadium was initially known as Green Point Stadium after the previous stadium.

Cape Town Stadium is a purpose built football stadium which was constructed for the 2010 World Cup which was hosted by South Africa. Known as Green Point Stadium during the planning and construction phases, a name which it inherited from the previous ground on the site, it was officially named Cape Town Stadium after the city asked the general public to propose names for it in October 2009.

Costing an estimated $600 million USD,  Cape Town Stadium took 33 months to build and was designed by GMP Architects. Collaborating with local South African firms, the German architects were later hired to design Poland’s National Stadium, and Ukraine’s Olympic Stadium on the back of their work on Green Point.

Similar to The Calabash Stadium and others, the capacity was modified during the World Cup in order to accommodate additional press sections and executive facilities. For the tournament the capacity was increased to 64,100 but after sections of temporary seating were removed, the capacity now sits at 55,000.

For the World Cup Cape Town Stadium hosted a total of eight matches including five group games, and a semi final between Uruguay and Netherlands. Three sell-out matches were recorded against Uruguay and France, England and Algeria, and a quarter final between Diego Maradona’s Argentina and Germany.

To ensure a sustainable legacy of the tournament, and successful Post-World Cup legacy, a consortium led by South Africa’s Sail Group and French based Stade de France will lease the ground from the city and act as stadium managers. Currently it is used as a multi-purpose venue, hosting football, rugby and even music concerts on a regular basis. 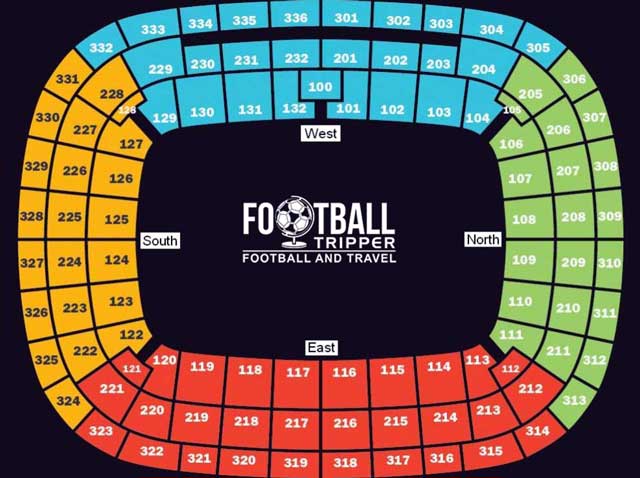 How to get to Cape Town Stadium

Where is Cape Town Stadium?

Who plays at Cape Town Stadium?

What is the capacity of Cape Town Stadium?

As of 2023 Cape Town Stadium has an official seating capacity of 55,000 for Football matches.

When was Cape Town Stadium opened?

Covid Restrictions may be in place when you visit Cape Town Stadium in 2023. Please visit the official website of Ajax Cape Town & Cape Town City F.C for full information on changes due to the Coronavirus.