Avanhard Stadium in Luhansk originally opened in 1951 as the small Kliment Voroshilov Stadium with the capacity standing at less than 7,500 after opening. Renamed in 1961 after the military term “Vanguard”, a handful of stadiums across Ukraine such as in Uzhhorod and Lutsk became part of the Soviet Sports Society for Ukrainian industrial workers belonging to trade unions.

The stadium grew rapidly in size during the 1960s when it peaked at a capacity of 40,000 although renovations carried out in every subsequent decade decreased the overall size of the ground. The first notable program of modernisation occurred in 1986 when the capacity was reduced to 32,243 following European wide concerns about stadium safety after the disaster at Heysel.

The next major renovations occurred in 2003 after the ownership of the Avanhard Stadium transferred from Luhanskteplovoz to the Luhansk Oblast Administration which saw the capacity reduced to 22,288. The new owners created a larger amount of corporate hospitality features, and installed modern plastic seating in order to keep in line with match-day trends across the continent.

To date the highest level of football held in Luhansk Stadium has been the European Cup back during the 1973-1974 season although in recent years, the club participated in the play-off of stages of the 2014-2015 Europa League. The club defeated KF Laçi, and Molde FK but failed to progress to the group stages after being defeated by Feyenoord 5-4 on aggregate in an entertaining pair of matches.

The Stadium was damaged in July 2014 after a Mortar Attack by Pro-Russian Separists , but tenants FC Zorya Luhansk continue to play their home matches in the Donbass region unlike Shakhtar Donetsk who have temporarily vacated the 2009 built

Below is a seating plan of Zorya Luhansk's Avanhard Stadium (Luhansk): 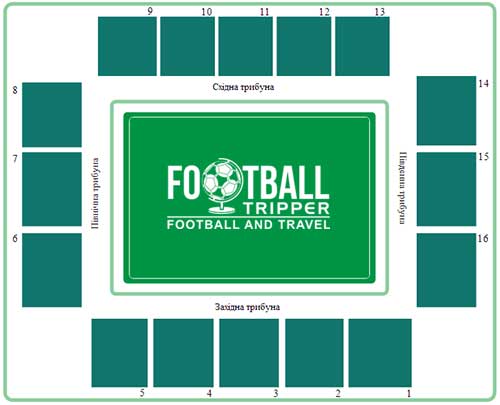