Stade de l’Abbé-Deschamps is the home ground of AJ Auxerre and for a while it was one of the few stadiums in France which was owned by the football club rather than the local council. First opened in 1905, it was renovated just under 90 years later in 1994, and today has a capacity of 24,493.

Stade de l’Abbé-Deschamps first usage for football dates back to October 1918 after Auxerre’s were unable to secure a long term lease on a suitable location which prompted the club to purchase their own plot of land. By 1930 AJA had constructed the first grandstand with funding from the General Council of the Yonne, and in 1949 the stadium was renamed in honour of Abbe Deschamps who founded the club back in 1905.

AJ Auxurre’s stadium remained relatively modest until the 1980s when the athletics track had long fallen out of use, and the club decided to construct stands on top of it to create a more intimate football ground. With the addition of a larger grandstand in 1984, and two goal-end stands ten years later, the stadium took on its current rectangular form as we know it today.

Since becoming a four-sided ground, Stade de l’Abbé-Deschamps hasn’t really been structurally altered in any significant way. Whilst the stadium was refurbished at the end of the season in 2010 to comply with updated UEFA stadium requirements for the Champions League, and the changing rooms were renovated in 2011,  you would hardly classify this as major construction work.

To date the record attendance for a domestic match is set at 22,500 after a large crowd gathered for the match against FC Nantes  on 18th May 1996 after Auxurre were crowned Ligue 1 Champions. The highest attendance for a European match came during the 1996/1997 season when Auxurre faced eventual winners Borussia Dortmund in the quarter finals of the Champions League.

Whilst not the largest football stadium, AJ Auxerre can rightly be proud of their Stade de l’Abbé-Deschamps as along with AC Ajaccio’s Stade François-Coty, it is one of two privately owned football grounds in France. As for the future of the stadium, there are no current renovations in the pipeline or plans to relocate to newer facilities.

Below is a seating plan of Auxerre's Stade de l’Abbé-Deschamps: 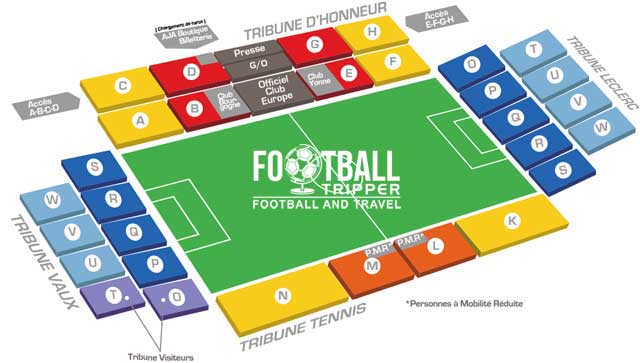