Stade Gaston Gérard is the home ground of regular Ligue 2 fixture Dijon Football Côte d’Or and it currently has a capacity of 15,995. First opened back in May 1934, Parc des Sports Gaston-Gérard is technically a multi-purpose stadium, although it is predominantly used for France’s favourite sport – football.

Stade Gaston Gérard was first inaugurated on 19th May 1934 with an opening ceremony conducted by President Albert Lebrun. Originally known as Parc des Sports Dijon, the stadium was later renamed in honour of Gaston Gérard in 1969. Serving as the Mayor or Dijon over a sixteen year period between 1919 and 1935, the locally born politician was instrumental in the creation of the stadium from granting planning permission to allocating state funds.

Initially constructed with a capacity of 10,000 and a fully functioning athletics track, today’s version of the stadium is much different to the original which dates back to the Pre-War period. The most significant renovations in recent years were implemented over a two year period between September 2008 and October 2010.

Two new goal-end stands replaced the previous “curvas” to make the stadium rectangular in shape. Constructed on top of the athletics track at a distance which is much closer to the pitch, Stade Gaston Gérard was essentially reconfigured in order to improve the match day experience for the average football fan.

The second phase of the stadium’s reconstruction is set to be complete by 2017 and will see the addition of a new east stand which will essentially complete Gaston Gérard. Estimated to cost anywhere between €18-21 million euros for the entire project, the final capacity is believed to be 22,000.

This means that the stadium’s record attendance of 15,869 could theoretically be beaten in the future. Set on 5th March 1961 during a match between Stade de Reims and Olympique Alès, a brand new venue and a home match against one of France’s largest teams could definitely beat this figure.

Below is a seating plan of Dijon's Stade Gaston Gérard: 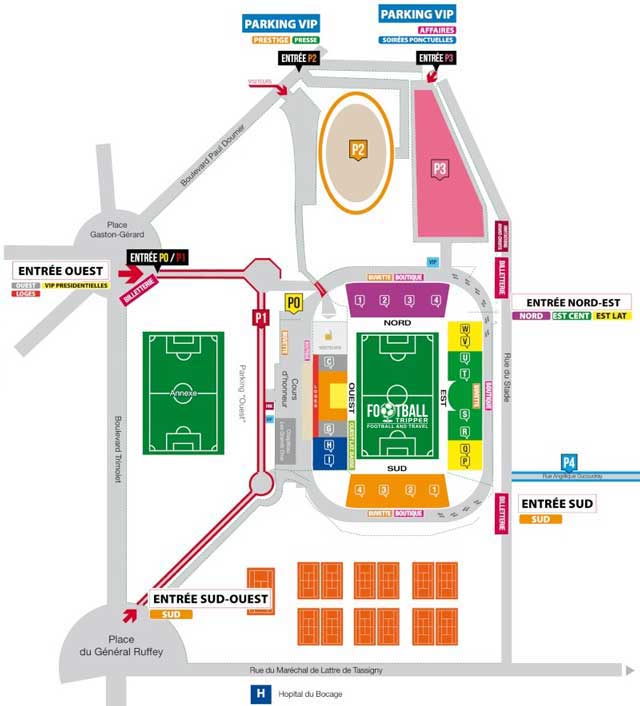 How to get to Stade Gaston Gérard

Where is Stade Gaston Gérard?

Who plays at Stade Gaston Gérard?

What is the capacity of Stade Gaston Gérard?

As of 2023 Stade Gaston Gérard has an official seating capacity of 15,995 for Football matches.

When was Stade Gaston Gérard opened?

Covid Restrictions may be in place when you visit Stade Gaston Gérard in 2023. Please visit the official website of Dijon for full information on changes due to the Coronavirus.