Molineux Stadium is the home ground of Wolves F.C. Located in the Whitmore Reans area, north-west of the city centre, the stadium first opened in 1889 and was extensively modernised in the early 1990s resulting in today’s 30,852 capacity.

Molineux Stadium has been the home of Wolverhampton Wanderers since 1889, and holds the distinction of being one the first “complete” stadiums in the history of the Football League.

Named after a successful local merchant, Benjamin Molineux, who previously built a house where the ground sits today, the estate was purchased in 1860 by O.E McGregor who converted the land into a park for the general public.

Acquired by Northampton Brewery in 1889, the brewers kept the football pitch in place and allowed Wolves to start renting it. After a summer of renovation work it hosted its first league match on 7th September 1889.

A record 4,000 fans saw the home side defeat Notts County 2-0 in the inaugural fixture, which was a great scalp to claim at the time.

The ground’s capacity peaked in the pre-war period with the record attendance set during a first division match against Liverpool on 11th February 1939.

Attracting 61,315 supporters, the post-war average capacities slowly declined each decade after the introduction of increasingly stringent stadium legislation. Towards the end of the 20th century Molineux’s capacity had more than halved.

Modern day Molineux with its current 31,700 capacity came about in the 1990s after the publication of the Taylor Report. Recently taken over by Sir Jack Hayward who helped restructure the club’s debts, The club invested in new all-seater stands and demolished the soon to be outlawed terraces.

In 1992 the Stan Cullis Stand was built, followed by the Bill Wright Stand and the Jack Harris Stand (Now Sir Jack Hayward stand) a year later in 1993.

Currently there are ongoing plans to develop Molineux ever further in the future. Announced in May 2010, and submitted for planning permission three months later in September, the multi-million pound development is set to span across four distinct phases.

So far Phase 1 which saw the demolition and rebuilding of the Stan Cullis Stand is the only one to be enacted, having been completed in time for the start of the 2012-2013 season.

Below is a seating plan of Wolves's Molineux: 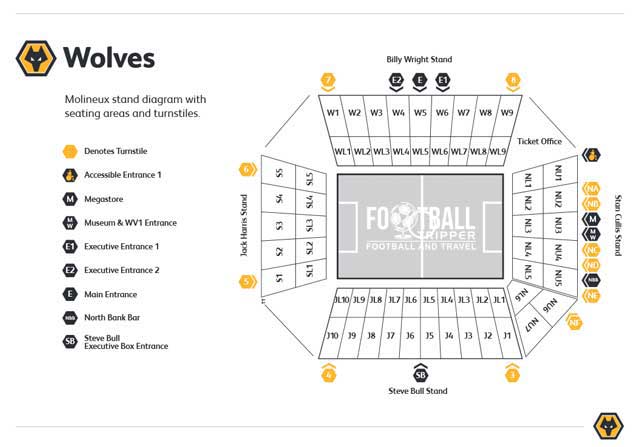 Away fans are given their allocation in the Steve Bull stand, and if they sell this out they can be also be housed within the lower Stan Cullis corner – totalling 4,500.

With the quality of the concourses relatively consistent throughout Wolverhampton’s ground, as well as both stands being free from troublesome support beams, the only thing that really separates the two away sections is the distance from the pitch.

The Stan Cullis Stand is much closer to the action whereas the two full-length stands are set further back from the field of play for reasons unknown.

Home fans can pretty much take their pick from any of the numerous pubs located around both Molineux and the city centre whilst away fans by all accounts have much less choice as many pubs only permitting fans on match day including the normally neutral Weatherspoons owned “The Moon Under Water”.

Nevertheless, away fans in small groups and with no visible colours often find somewhere to drink eventually with the bar inside the Premier Inn behind the train station often a popular haunt due to its reliability.

It is sometimes referred to as The Bluebrick or Table Table and is the restaurant connected to the hotel.

It may be case of trying a few places or if you can’t be bothered with the potential hassle, just heading straight to the ground where you can drink within the concourse.

There are innumerable dining options within the city centre which is encircled on the map by the St. Peters Ring Road. Notable fast food options include KFC, Subway, Greggs and McDonalds.

Around the ground itself there are numerous fast-food vans and a few chippies with the Balti Pie coming very much recommended by visiting fans.

Wolverhampton Wanderers operate two stores throughout the city in addition to their popular 24/7 Online Store. The opening hours/times are listed below but unfortunately they don’t take into account matchdays, or late kick-offs.

Wolves offer fans the chance to undertake a comprehensive 90 minute of the facilities at Molineux including access to match day restricted access areas such as the home dressing room, executive boxes, players’ tunnel and both manager’s dugouts.

Taking place at 7.00pm on selected Friday evenings and typically lasting 90 minutes, a tour of the local ground can make for an excellent evening activity for families or die-hard fans.

To book your place on the tour, and to find out more information you can either visit this page, or phone Emily Westwood on 01902 828366 or send an email to her via [email protected]

How to buy Wolves Tickets

Tickets to see Wolves play at Molineux can be obtained through the typical channels such as the the telephone (0871 222 1877), in person at the stadium ticket office/club shop, and most popularly the official e-ticking website.

Championship ticket prices are as follows:

How to get to Molineux

Molineux Stadium is located less than half a mile from Wolverhampton city centre, across the A4150 dual carriageway next to the local University campus and West Park.

Molineux Stadium’s address for satnav is as follows:

Wolverhampton Wanderers advise that the following car parks around the stadium are suitable for “hassle free” parking on match days, although they will cost you a few pounds and can get quite congested on matchdays:

Match day parking passes can be purchased either at the ticket office on the day or by phoning the club in advance on 0871 222 1877. For more information and to see a map of council owned car-parks visit this page.

Please note that to the west of the ground there is a residents only parking scheme which means you will be receive a parking ticket if you choose to flout the rules!

Wolverhampton railway station is located approximately 0.7 miles east of Molineux Stadium, across the other side of the city’s A4150 ring road.

Services in and out of the city to the rest of the UK are operated by four train companies: Virgin Trains, London Midland, CrossCountry and Arriva Trains Wales.

The distance by foot will likely take you around 15 minutes.

The closest hotel to Molineux Stadium is The Travelodge located 5 minutes south on Waterloo Road which is on the side of the West Stand.

Close to Wolverhampton station there is a Premier Inn and within the city centre itself there is a Novotel, the affordable Britannia and the Wulfrun Hotel.

Who plays at Molineux?

English side Wolves play their home matches at Molineux.

What is the capacity of Molineux?

As of 2023 Molineux has an official seating capacity of 32,050 for Football matches.

When was Molineux opened?

Molineux officially opened in 1889 and is home to Wolves

What is the postcode for Molineux?

The postcode for Molineux is WV1 4QR.

Covid Restrictions may be in place when you visit Molineux in 2023. Please visit the official website of Wolves for full information on changes due to the Coronavirus.