Bescot Stadium or Bank’s stadium for reasons of sponsorship, is a purpose built football stadium located in the West Midlands industrial town of Walsall.

Bescott Stadium first opened on 18th August 1990 with a preseason friendly against West Midlands neighbours Aston Villa. The ceremony was conducted by former Stoke player and footballing icon Sir Stanley Matthews, attracting a near sell out crowd of an estimated 9,551 spectators.

Built at a cost of £4.5 million by GMI Construction, Bescott Stadium replaced the Saddler’s previous home of Fellows Park.

Dating back to 1896, the old ground was located a quarter of a mile away from the current one and is now the site of a Morrisons supermarket.

Upon opening, the ground consisted of two seating stands and two goal-end terraces which gave Bescott a capacity of around 11,000.

After the publication of the Taylor Report in 1990 however, the capacity was reduced as the club opted to convert the terrace used to house away fans into seating. This reduced the capacity to 9,800.

A decade after opening the original capacity was essentially restored when the Tile Choice Stand was expanded during the 2002-2003 season. The addition of a second tier sandwiched between hospitality lounges increased the capacity to 11,300, which was a slight improvement.

As for the future of Bescott Stadium, Walsall have twice tried to sell the stadium to the local Council once in 2008 and again in 2011, although the council have voted against the proposal on both occasions.

This means that plans to develop the southern part of the ground in the same mould as the Tile Choice Stand remain abandoned for now unless the club raise additional source of finance.

Below is a seating plan of Walsall's Banks’s Stadium: 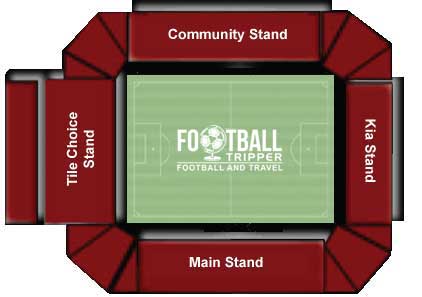 Visiting supporters are housed behind the southernmost goal-end in the KIA Stand, which is named after the Korean automobile manufacturer.

Pretty much uniform in size with the two side stands, the KIA Stand consists of a single tier of seating enclosed within what appears to be a relatively low roof.

The Away Stand, which sits opposite the much larger Tile Choice Stand towards the north, is capable of welcoming an estimated 1,900 supporters and whilst many visiting fans aren’t that impressed with the location of the ground, they are impressed with the acoustics within Bescot Stadium which seem to travel well on matchdays.

The concourse does feel slightly dated and queues can sometimes feel too large for the toilets at have time, but this is balanced by the two fast food kiosks which well decent grub efficiently and at decent prices.

Lastly, the KIA Stand does suffer from the occasional poor sight-lines due to existence of no less than four support beams, but this imperfect is part and parcel of visiting the less glamorous grounds in England!

At the stadium itself, towards the south-west, there is the club run Saddlers Club which is an excellent space for both home and away supporters to enjoy a prematch pint.

Consisting of two decent sized function rooms, one for each set of fans, the Saddlers Club can accommodate around 450 fans, and is available to enter for at an entrance fee of £2.00 although under 16’s enter for free.

Otherwise there really aren’t many other feasible drinking options…

Located next to the M6 in a far from commercialized area, there really isn’t much choice on offer, although there is a McDonald’s to be found less than 10 minutes away.

This can be reached by following Bescot Crescent road west of the stadium as it takes you north past Halfords.

You’re probably off better sticking to the fast-food on offer at Walsall’s Banks Stadium instead.

The Saddlers operate a club shop at Bescot in addition to their own official online site,  Walsall FC E-Store. The opening times for the store at the ground are as follows:

For more information, to confirm opening hours or to see if the new shirt is in stock yet feel free to fire a message to [email protected] or phone the store on 01922 651 410.

It doesn’t appear as if Walsall FC currently offer fans the chance to undertake a stadium tour of Bescot Stadium.

How to buy Walsall Tickets

The easiest way to compare seats and to get the cheapest prices is to visit the club’s official E-Ticketing Page.

Prices are divided into categories A and B depending on the opposition with club offering a small incentive in the form of a discount for those who book their tickets ahead of the matchday.

All prices below are for “Advance” i.e booking before matchday:


How to get to Banks’s Stadium

Where is Banks’s Stadium?

Bank’s stadium is located two miles south of Walsall city centre within the area of Bescott which is where the non-sponsorship name of the ground is derived from.

The car park at Bank’s stadium charges a reasonable £4 per vehicle with spaces issued on a first come first served basis meaning that you should try to get to the ground early in order to ensure your space.

Long stay parking s not permitted at the retail park so therefore it is not suitable for those attending the match, with those who choose to ignore this potentially facing parking tickets. Just a heads up.

Bank’s Stadium is served by its very own station known as “Bescot Stadium” with London Midland operating services from both Walsall and Birmingham.

Walking to the stadium couldn’t be easier and takes less than five minutes: exit the station cross the River Tame via the footbridge and proceed across the motorway via the path underneath it. The stadium will be immediately visible once you have crossed the M6.

The closest hotel is the Park Inn located less than 2 minutes south-east from the stadium on Bescot Crescent. The rest of the options depend on how you initially travelled to the stadium.

If you drove and have a car for example, just off the M6 near the Walsall Exit there is a congregation of hotels such as the Holiday Inn and Premier Inn, whereas if you came in via train your options are either within Walsall city centre or Birmingham.

Who plays at Banks’s Stadium?

English side Walsall play their home matches at Banks’s Stadium.

What is the capacity of Banks’s Stadium?

As of 2023 Banks’s Stadium has an official seating capacity of 11,300 for Football matches.

When was Banks’s Stadium opened?

What is the postcode for Banks’s Stadium?

The postcode for Banks’s Stadium is WS1 4SA.

Covid Restrictions may be in place when you visit Banks’s Stadium in 2023. Please visit the official website of Walsall for full information on changes due to the Coronavirus.