Currently known as Weston Homes Community Stadium for sponsorship reasons, the 10,105 capacity ground first opened at the start of the 2008/2009 seasons and is home to Colchester United F.C

Plans to replace Layer Road with a set of more modern facilities were formulated as early as the 1970s when the club worked in conjunction with Colchester Borough Council to find a new home.

One early proposed site for the new ground was along the Avenue of Remembrance, although plans were scuppered when Colchester became relegated to the fourth division and only attendances began to suffer.

With the onset of high-profile stadium disasters in the 1980s such as the Bradford City Stadium fire, and Hillsborough, the wooden stands of Layer Road appeared to have had their day.

Facing a bill of over ÂŁ500,000 to ensure spectator safety, the groundâ€™s capacity was reduced to 4,900 but somehow the antiquated ground hung on. It wasnâ€™t until the 13th November 2006 that the club would receive full planning permission for a brand new stadium.

Situated on a piece of council owned land known as Cuckoo Farm, plans were submitted and approved by Deputy Prime Minister John Prescott, and construction began on the site in June 2007.

As an additional source of revenue Colchester sold the naming rights to Weston Homes Community Stadium for ÂŁ2 million over 1 years.

The inaugural fixture at Colchester Community Stadium was held against Athletic Bilbao on the 4th August 2008, with the first competitive fixture held two weeks later against Huddersfield Town in League One.

Both fixtures failed to attract a sell out crowd, and it wasnâ€™t until an Anglian Derby against Norwich on January 2010 that the new groundâ€™s 10,105 capacity was reached.

Below is a seating plan of Colchester United's JobServe Community Stadium: 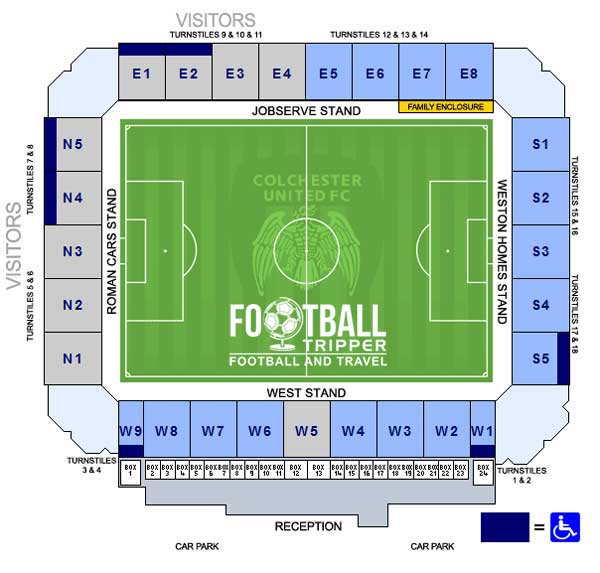 The stands at the Community stadium are as follows: Roman Cars Stand (North) where away fans are housed, Jobserve Stand (East), Weston Home Stand (South) and the main stand (West) where the club’s facilities are housed.

The location of the away fans inside Colchester Community Stadium depends on how large the traveling contingent is, with supporters routinely housed within the northern section of the JobServe stand by default.

If the standard allocation of around 1,000 seats is deemed to be too small, fans will be moved to the North Stand which is capable of seating twice as many visitors, usually around 2,000 seats.

As a modern stadium which opened in 2008 all four sections of the ground provide fans with unrestricted views and comfortable seats.

Taller fans appear to be impressed with the levels of leg-room compared to some of the â€śsteeperâ€ť stands, and the concourse is also noted for being spacious inside.

Located on the outskirts of Colchester there really arenâ€™t many choices when it comes to pre-match pints, with the club thankfully providing fans with a decent bar inside the Weston Homes Stand.

Open to both sets of supporters it usually opens at 12.15 for a 3.00pm kick-off, with relaxed stewarding allowing fans to take drinks outside in order to watch whatever pre-match entertainment is on offer â€“ usually live music.

With the club encouraging the use of the shuttle-bus on matchdays, those coming into Colchester railway station have the option of grabbing a drink at the either the Bricklayers or the Norfolk which are both pubs located less than five minutes from the railway track.

If you choose to walk or are driving, the Dog & Pheasant is technically the nearest pub although it is still a mile or so away from the ground and reportedly only admits home fans.

There really arenâ€™t many food options when going to watch Colchester United play at home. For those coming from the station there is an Asda and Pizza Hut within 10 minutes walking distance, otherwise youâ€™ll be eating the typical fare available at the ground â€“ not that itâ€™s necessarily a bad thing!

Colchester FC operate a club shop at Community Stadium in addition to their own official online site,Â  CUFC Retail. The opening times for store at the ground are as follows:

It doesnâ€™t appear as if Colchester currently offer fans the chance to undertake a stadium tour of the Community Stadium.

If this changes, weâ€™ll be sure to update this section.

How to buy Colchester United Tickets

Colchester United have one of the more convoluted systems for pricing their home tickets with the club devising no less than five prices based on when you purchase the tickets: Early Bird (start of the season), Super Saver (five weeks), Saver (three weeks), Advanced (one week) and matchday (0 days).

Below is a snapshot of advanced ticket prices for the 2015 season:


Tickets are more expensive the more central you get.

To book tickets to see Colchester either visit the Ticket Office at the ground, phone 0845 437 9089 for the ticket hotline or browse the online ticket office, Colu Tickets

How to get to JobServe Community Stadium

Where is JobServe Community Stadium?

The Weston Homes Community Stadium is located next to the Rugby Club adjacent to the A12 dual carriageway, approximately 2.4 miles north of Colchesterâ€™s city centre.

Colchester Community Stadiumâ€™s address for satnav is as follows:

Colchester United have a car park with 700 spaces at the ground at a cost of ÂŁ6.00 per car with tickets available to those who book in advance by calling the ticket office on 0845 437 9089.

Away fans are also permitted to use the car park but are given a smaller allocation so booking as soon as possible is usually advised.

Please note that the immediate area around the ground falls under a Parking Exclusion Zone on matchdays, with vehicles liable to a ÂŁ70 fine if they happen to contravene the rules.

Make sure you read all the parking related signage!

Colchester railway station is located approximately 1.8 miles south of the Community Stadium which is a walk of around 40 minutes back towards the city centre, making it not one of the most accessible stadiums for non driving football fans.

Located out of town the closest hotels to the Weston Homes Community Stadium arenâ€™t really that close with nothing really accessible by foot within 20 minutes.

East of the stadium along the A12/A120 junction there isÂ  Ramada and Premier Inn, to the West on the same stretch of road there is a Holiday Inn and back towards the historic city centre there is the Railway Sleeper Lodge next to the train station amongst other choices.

Who plays at JobServe Community Stadium?

What is the capacity of JobServe Community Stadium?

As of 2022 JobServe Community Stadium has an official seating capacity of 10,105 for Football matches.

When was JobServe Community Stadium opened?

What is the postcode for JobServe Community Stadium?

The postcode for JobServe Community Stadium is CO4 5UP.

Covid Restrictions may be in place when you visit JobServe Community Stadium in 2022. Please visit the official website of Colchester United for full information on changes due to the Coronavirus.