First opened in 1937, the 9,271 capacity ground mostly hosts League One matches and the reserve games of Tottenham Hotspur.

Leyton Orient first moved into Brisbane Road in 1937 although they were not the first club to play there, with amateur side Leyton F.C previously using the pitch when it was known as Osborne Road. One of the smaller grounds in London, Brisbane Road remains a modest sized stadium to this day capable of only seating 9,271 fans.

Renovations have occurred infrequently for the club with the the onset of the Second World somewhat quelling the enthusiasm and initial plans which the new residents had for the stadium.

It wasn’t until 1949 that the club undertook its first major improvement of the ground when they levelled a grass bank to improve spectator views and installed a crash barrier.

The cheaper terrace sections were the next section of the ground to be developed in the 1950s and after the club gained promotion to the First Division in 1962 that the main stand’s capacity was increased. T

he addition of a new wing increased the total seating capacity to 3,500, and in 1978 the West Stand was also converted to all-seating.

After the publication of the Taylor Report in 1990 which mandated compulsory stadium seating for clubs in the top-two divisions of English Football, the club took their time in implementing changes as they weren’t sure whether or not they would be affected by legislation.

This led to the demolition of the southern terrace in 1996, which wasn’t to be built until three years later.

Due to sponsorship reasons the ground is currently known as The Matchroom Stadium after the Chairman’s sports company.

The club did apply to move into the Olympic Stadium, although with an average attendance of 5,000 this was deemed to be unrealistic and West Ham United were instead chosen to become the new tenants at the start of the 2017 season.

Below is a seating plan of Leyton Orient's The Breyer Group Stadium: 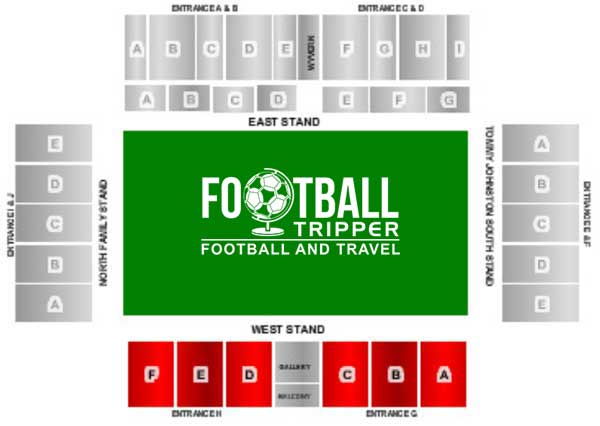 The four stands at Brisbane Road are as follows: Main stand (West) which is where the club’s facilities are based, the family stand (North), East Stand which is the oldest and the Tommy Johnson Stand (South).

The Breyer Group Stadium Away End

For the foreseeable future away fans are housed within the southernmost section of Main Stand which is shared with Leyton Orient supporters.

Known as the east stand, the seats can roughly be divided into four approximate areas, and visiting fans are allocated on average 1,000 seats per game within the corner.

Although the main stand is the oldest part of matchroom stadium it has a certain charm to it, with the classic facade and angular roof being a real throwback to old-school British stadiums.

The only drawback is that the roof is made possible by the support beams which can obstruct the view of the immaculate turf at Brisbane Road.

Depending on whether you catch the over or underground you have one or two options of where to grab a pint from.

From Leyton tube station on the Central line there is the Leyton Technical Pub on the way to the stadium which is a former town hall. 10 minutes south of the station along the A112 there is The King Harold which is a traditional London boozer.

From Leyton Midland Road overground station you can walk around 1 mile north to get to the King William IV Bar and Hotel which is also a brewery, boasting over 16 different beers at any one time.

There is also the Coach & Horses Pub which is naturally popular due to its proximity to the stadium, and the fact that it is essentially midway between both stations.

Finally, at the Matchroom Stadium there is also a supporters club which permits both sets of fans to share a pint, providing there is enough space. Costing just £1.00 to enter, it’s advisable that you get there early to get a space, and to sample the range of ales as listed in the CAMRA Good Beer Guide.

Outside of Leyton Underground Station fans are spoilt for unhealthy choices with the existence of a KFC, Burger King and Asda.

Just by walking in either direction on High Road Leyton which connects the two stations, you will encounter an abundance of food places ranging from Fish & Chips, Kebabs and Pizza.

At Brisbane Road itself you can also enjoy classic football grub such as Sausage Rolls, Burgers and Pies.

Leyton Orient run a club shop at Brisbane Road as well as their own official online site known as the Orient Club Shop. The opening times for the store at the ground are as follows:

On matchdays the shop will be open for 60 minutes after the full time whistle which gives fans another chance to grab a memento of their day out.

For more information, to confirm opening times or to check availability feel free to send an email to [email protected] or phone the store on01293 410 000.

It doesn’t appear as if Leyton Orient FC currently offer fans the chance to undertake a stadium tour of Brisbane Road.

How to buy Leyton Orient Tickets

Tickets are free of charge for Under 11s if accompanied by an adult and booked online, with Under 18s permitted to enter the North Stand for just £5. Concessions apply to under 18s, students with valid ID, over 65s and members of the Armed Forces.

How to get to The Breyer Group Stadium

Where is The Breyer Group Stadium?

Leyton Orient’s Brisbane Road is located within the East London borough of Waltham Forest, around 6.5 miles away from the capital’s traditional centre.

Brisbane Road stadium’s address for satnav is as follows:

Parking in London is a nightmare and this is certainly true of the area surrounding The Mathroom Stadium.

There is very limited on-street parking, and even if you can see a space there’s no guarantee that it’s available for non-residents. Always check the signs, and if in doubt, don’t risk it unless you can afford to pay the fine.

The closest overground railway station is Leyton Midland Road which is located 1 mile east from The Matchroom Stadium which nay or may not be convenient depending on your starting point.

Once you have exited the station follow High Road Leyton southwards past Leyton County Cricket Ground until you reach Windsor Road. Turn down here or any of the preceding roads and you will arrive at the stadium.

Hotels Near The Breyer Group Stadium

There are basically no hotels near the Matchroom stadium with my recommendation being to either hop on the tube back to where you came from in the centre or to walk down the road to the forner site of the Olympic and Paralympic Village.

Nearby is a Premier Inn Stratford and Holiday Express London which will both do the job without breaking the bank.

Who plays at The Breyer Group Stadium?

English side Leyton Orient play their home matches at The Breyer Group Stadium.

What is the capacity of The Breyer Group Stadium?

As of 2022 The Breyer Group Stadium has an official seating capacity of 9,271 for Football matches.

When was The Breyer Group Stadium opened?

What is the postcode for The Breyer Group Stadium?

The postcode for The Breyer Group Stadium is E10 5NF.

Covid Restrictions may be in place when you visit The Breyer Group Stadium in 2022. Please visit the official website of Leyton Orient for full information on changes due to the Coronavirus.