Home » England » One all Stadium

Field Mill or One Call Stadium for sponsorship purposes is a multi-purpose sports venue located in the town of Mansfield in Nottinghamshire, England.

Dating back to the late 19th Century, the ground has a current capacity of 10,000 although it is currently reduced to 8,186 for reasons of safety.

One all Stadium History

The site adjacent to Quarry Lane was originally owned by Cotton Doubler Company Greenhalgh & Sons Work who used the land as a recreational sports area for employees of the company.

One of the sons, Harwood Greenhalgh, became a professional footballer for Notts County and England, and this is believed to have inspired the company’s generous donation of the land for sports.

Mansfield Town FC started to play their home matches at the stadium from the 1919-1920 season onwards at the site, with the ground almost exclusively used for football since 1894, with the exception of some cricket matches.

The stadium as it exists today primarily took its form from modernisation plans which occurred between a two year period before and after the millennium between 1999 – 2001.

Opened on 28th July 2001 by Labour Peer John Prescott, the newly built North Stand, Quarry Lane End and West Stand were worlds apart from the ash mounds which constituted seating for spectators back in 1922.

The club still aspire to build a new 2,800 capacity stand on the site of the currently closed Bishop Street Stand, however raising the requisite capital remains an issue.

View of One all Stadium

One all Stadium Seating Plan

Below is a seating plan of Mansfield Town's One all Stadium: 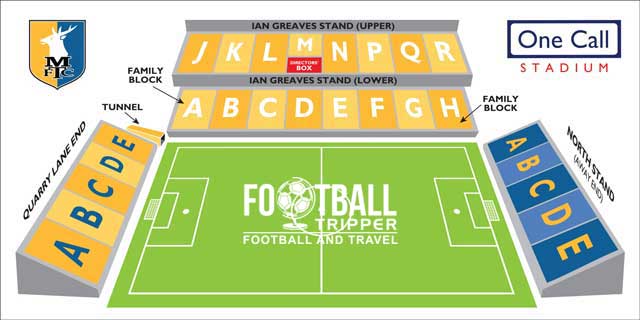 Mansfield’s One Call Stadium consists of four stands with only three of them currently in action: North Stand which houses the away fans, The Quarry Lane End (South) for home supporters and the Ian Greaves Stand (West) which is the largest. The Bishop street stand (East) is condemned and no longer in use.

One all Stadium Away End

Away fans are currently housed in the North Stand which is capable of accommodating up to 1,800 fans should the travelling contingent for whatever reason ever be that large.

The current seating arrangement for fans has reportedly annoyed quite a few of The Stags Fans who believe that it goes against tradition to base the away fans in the area of the ground which has historically been used by home supporters.

Still, away fans benefit from being based here as the North Stand is a fairly new construction and as a result has excellent views throughout with a lack of problematic support pillars for the roof.

At the stadium there is the Sandy Pate Sports Bar located beneath the Ian Greaves Stand which was refurbished in the summer of 2013 at an estimated cost of £80,000. According to the club it is one of the “finest facilities in the football league”.

Open on matchdays between 12.00pm and 5.00pm for supporters with a valid match ticket, it is open to the general public afterwards and throughout the week.

Away from the stadium there are quite a few pubs which welcome both sets of fans such as The Talbot on Nottingham Road close to Sainsburys, and opposite this Il Rosso which is an Italian themed Wine Bar which is slightly more expensive, and subsequently less busy with both “pubs” having televisions showing the latest sports news.

Lastly for those travelling along the A38 there is The Sir John Cockle Pub and around a quarter of a mile past this there is also The Bold Forester which has a large selection of real ales to sample.

Within the nearby retail park there is a Burger King (North East of Stadium), MCDonalds and KFC (South-East) and at Sandy Pate Sports Bar there is a new signature “Stag Burger” which could tickle your fancy.

Mansfield FC operate a club shop at The One Call Stadium in conjunction with their own online site, The Stags Club Shop. The opening times for the store at the ground are as follows:

For more information, to confirm opening hours or to check availability of the latest sportswear send a message to [email protected] or phone the store on 01623 482482.

It doesn’t appear as if Mansfield Town currently offer fans the chance to undertake a stadium tour of Field Mill.

How to buy Mansfield Town Tickets

Tickets to see The Stags can be purchased via the usual channels including telephone (01623 482 482), email ([email protected]), in person at the stadium ticket-office (Open Monday to Friday 10.00 am – 5.00 pm)  and on the internet by visiting MTFC Stags Tickets.

Concessions available to Seniors who are 60 years plus and full time students.

How to get to One all Stadium

Where is One all Stadium?

The One Call stadium is located 1.1 miles south of Mansfield town centre on the northern bank of the River Maun within an out of town retail park.

One Call Stadium’s address for satnav is as follows:

Like a lot of stadiums, Parking is limited at the One Call Stadium with the club operating one small car park for visiting fans on matchdays. Costing £5.00 per car, it is run on a strictly first come first served basis and supporters are advised that the car park closes at 2.30pm so you are advised to get their early.

Just a quick warning on the retail park near to the North Stand…it doesn’t permit matchday parking and is for short stay only so please double check signs before deciding to park around the ground.

Mansfield railway station is exactly 0.4 miles away by foot with a journey time under 10 minutes.

With the One Call Stadium visible from the train station it almost doesn’t need directions but alas, exit the station via the footbridge adjacent to platform 2 and walk through the retail park.

You can access the ground through 4 roads to the east and you can’t really get lost!

Hotels Near One all Stadium

The closest hotels are back near Mansfield Station with the Midland and The Victoria probably the most suitable options.

Towards the north of the city there is the Clifton Hotel and Mansfield Lodge which are also two other solid choices.

Who plays at One all Stadium?

English side Mansfield Town play their home matches at One all Stadium.

What is the capacity of One all Stadium?

As of 2023 One all Stadium has an official seating capacity of 9,186 for Football matches.

When was One all Stadium opened?

What is the postcode for One all Stadium?

The postcode for One all Stadium is NG18 5DA.

Covid Restrictions may be in place when you visit One all Stadium in 2023. Please visit the official website of Mansfield Town for full information on changes due to the Coronavirus.