First opened back in 1909, today’s 18,202 capacity stadium bears little resemblance to the original set of facilities at the site, with the main grandstand burning down in 1953, and the remaining stands modernised over the years.

Carlisle United’s ground was first built on Brunton Park back in 1909 after the club who were originally known as Shaddongate United felt that their ground at Millholme Bank was too small to satisfy the local area’s demand for live football.

After occasionally using the larger Rugby Ground, and then for a while the facilities at Devonshire Park, the club moved to the current site at Brunton Park after the land’s owner, The Duke of Devonshire, asked the club to relocate.

With stands constructed and the club now with a permanent home, it looked like Carlisle United would establish themselves as one of the best teams in England, however in 1953 they were forced to sell of local player Geoff Twentyman To Liverpool FC for £12,500.

This was deemed a necessary evil after the Main Stand was burnt to the ground as a result of an unfortunate electrical fault.

This set the club back a good few years in terms of development similar, and at the start of 2005, disaster struck again when flooding meant the club had to play their home matches at Morecambe’s Christie park for the second half of the season.

With facilities remaining relatively untouched since 1996 when the East Stand was opened at the start of the season, the club have occasionally explored plans to relocate to more modern facilities.

The most ambitious of these were presented in the late 1990s by former owner Michael Knighton, who formulated plans for a large 28,000 capacity ground. These are contrasted by the more recent 2011 vision of a 12,000 capacity ground in the Kingmoor area of Carlisle known as “Project Blue Yonder”.

Below is a seating plan of Carlisle United's Brunton Park: 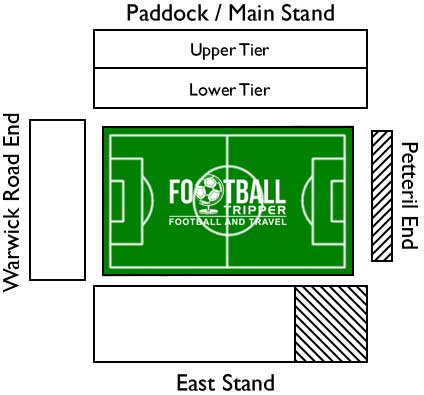 The four stands at Brunton park are as follows: The Paddock Stand (West) which houses the club’s facilities, The Waterworks Terrace (North), Story Homes Stand (East) which is the most recently built and lastly Warwick Road End (South) which is a covered terraced section behind the goal.

Blocks 2 and 3 of the East Stand house away fans who visit Brunton Park.

Known as the Pioneer Food Stand for sponsorship purposes, The Petteril End Terrace is occasionally used as well for when the away allocation is increased or when Carlisle are expected a large travelling contingent.

Beneath the stand in the concourse there is a bar which is decent place to grab a drink before the game, with the nearby food stall serving up reasonably priced grub.

Next to Brunton Park there is Carlisle Rugby Club on Warwick Road which allows both sets of supporters in before and after the match with the family friendly bar serving a decent range of beverages and snacks.

On the same road there is also The Beehive which can sometimes be a bit more discerning with what fans can and cannot enter, with The Howard Arms located Lowther Street also another option for those walking from the town centre.

Lastly behind the club’s main car park there is The Stoneyholme Golf Club which is more than welcome to fans on matchdays.

There really aren’t many dining options around the stadium itself, not including inside the concourses of course.

If you’re looking to grab a bite to eat on route to the stadium or stick to the town centre.

Carlisle United operate a club shop south of Brunton Park on Warwick Road in addition to their own official online site,  The Blues Store.

For more information, to confirm opening times or to check availability feel free to send an email to [email protected] or phone the store on 01228 554138.

It doesn’t appear as if Carlisle United FC currently offer fans the chance to undertake a stadium tour of Brunton Park.

How to buy Carlisle United Tickets

Tickets are always cheaper if you purchase in advance, and if you buy them on match day expect to pay a £3 premium in most cases.

Tickets are free for children under 7 when accompanied by an adult and  for ambulant carers.

How to get to Brunton Park

Where is Brunton Park?

Brunton Park is located less than 1 mile east of Carlisle city centre sandwiched between the River Petteril and the A69 Warwick Road.

Brunton Park stadium’s address for satnav is as follows:

Car Parking immediately within the vicinity of the ground is extremely limited with spaces reserved for pass holders which include the likes of staff, players, press and the visiting team.

There are however limited space within the car park behind the Pioneer Foods stand costing £2.5 although you’re advised to get there early due to high levels of demand.

Failing this the club recommends parking in the Rosehill Industrial Estate opposite Tesco near the M6 – this will leave you will a manageable 20 minute walk.

Carlisle Railway Station or Carlisle Citadel Station as it is often referred to as is exactly 0.9 miles west of Brunton Park and is served by the West Coast Main Line.

Upon exiting the station proceed straight across Botchergate and travel along  the A7 crescent as it curves round, becoming Warwick Road where there is a William Hill and Nando’s restaurant.

Walk along here this road for 15-20 minutes and the stadium will be on your left hand side past Carlisle Rugby Club.

The closest hotel to Brunton Park appears to be the Holly Trees Hotel on  the A69 Warwick Road although just a few hundred metres in the opposite direction (East) there is a Premier Inn which might be more suitable for some.

Back towards the city centre there are lots of choices near the train station such as the Ibis Hotel Carlisle and the slightly more expensive  but closer Hallmark Hotel Carlisle.

Who plays at Brunton Park?

What is the capacity of Brunton Park?

As of 2023 Brunton Park has an official seating capacity of 17,949 for Football matches.

When was Brunton Park opened?

What is the postcode for Brunton Park?

The postcode for Brunton Park is CA1 2BX.

Covid Restrictions may be in place when you visit Brunton Park in 2023. Please visit the official website of Carlisle United for full information on changes due to the Coronavirus.