Boundary Park or SportsDirect.com Park for reasons of sponsorship is the home ground of lower league side Oldham Athletic A.F.C.

Located in the North-west of the town within the region of Greater Manchester, the 10,638 capacity ground first opened in 1904.

Boundary Park’s usage for football dates as far back as 1896 when it was known as the Athletic Ground, and it was used by Oldham’s first professional association football club, Oldham County F.C.

After the club folded three years later in 1899, Pine Villa F.C took over the tenancy, and eventually changed their name to Oldham Athletic.

Although the stadium has had a handful of sponsorship names in recent years such as SportsDirect.com Park, similar to Newcastle’s St James Park, football fans most commonly refer to the ground as Boundary Park.

The name is derived from the fact that the ground separates two Oldham Towns: Royton to the North and Chadderton to the West.

At Boundary Park’s peak, the ground could reportedly hold up to 50,000 supporters, with the Oldham’s record attendance set during an FA Cup match against Sheffield Wednesday. Taking place in 1930 long before the onset of the Second World War, the fixture attracted an impressive 46,471 supporters.

Today, the facilities and size of Athletic Ground are somewhat more modest with the current capacity set at 10,638. The conversion to all-seating occurred during the 1994-1995 season, five years after the publication of the Taylor Report which enforced mandatory seating at top-flight football matches.

As for the future of the historic stadium, it appears as if Oldham will remain at Boundary Park for the foreseeable future after receiving £5.7 million in funding from the council in 2011.

This will allow the Latics to redevelop the north stand and other parts of the ground with plans for a £20 million pound stadium in Failsworth now appearing to be shelved.

Below is a seating plan of Oldham Athletic's Boundary Park: 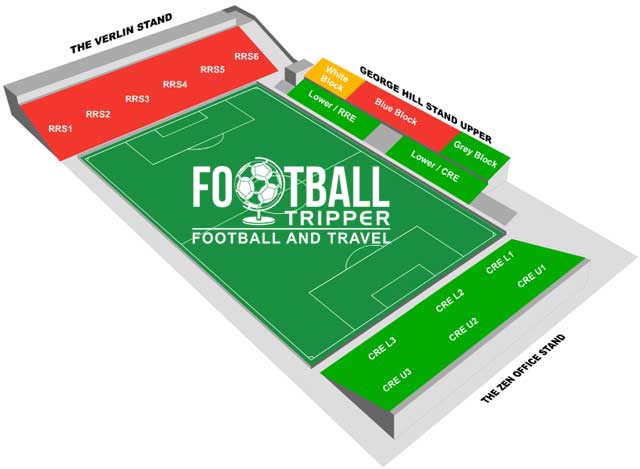 There are only three sections at the ground as the North stand is under construction: The Verlin (East), George Hill (South) and The Zen Office (West).

Away fans are always housed within the Verlin Stand which is the westermost goal-end within Boundary Park, although the position changes depending on the number of fans expected to make the trip.

If you look at the picture of the Verlin Stand from the above slideshow you will see that six stands are divided by a gutter in a ratio of 4:2.

The standard allocation of 1,600 places is usually contained within the two northernmost blocks in the stand which are adorned with the letter “C” and “S” respectively.

If it is an FA Cup or the anticipated away support is much larger, then the places will switch and the home supporters will be on the side with 3,000 places instead or put simply, letters, “LATI”.

The concourse itself and levels of leg room are spacious enough with the stand offering unrestricted views of the Boundary Park pitch which sometimes isn’t the case in older football stadiums in England.

The nearest pub to Boundary Park is the Clayton Green which is located south-west of the ground on Sheepfoot Lane.

Less than a few hundred yards from the Main Stand, Clayton Green is a Brewers Fayre Pub which has a decent selection of ales and other drinks as standard.

Second to this in proximity (although much further away), is the Greyhound Inn which is accessible from Netherhey Lane off of Broadway A663.

The third and final option is the Old Grey Mare which is located on the A671 north of the Royal Oldham Hospital from Sheepfoot Lane. This is very popular with home supporters although discreet away fans are usually more than welcome.

As Oldham Athletic do not currently sell alcohol to away fans inside the ground, away fans may want to be on their best behaviour in all three of these pubs!

The largest selection of dining options comes from the retail park located north-west of the stadium, approximately 15 minutes or so away. Here there is everything ranging from the Toby Carvery to Nandos and from Asda to KFC.

Inside Boundary Park expect to find the usual fast-food fayre including pies, chips and burgers.

Oldham Athletic operate a club shop at the SportsDirect.com Park in addition to their own official online site,  We Are Latics. The opening times for the store at the ground are as follows:

Neither are run by Mike Ashley’s lot despite the sponsorship name of the stadium…for more information and to confirm opening times you can speak to someone at the store by phoning 0161 785 5169.

It doesn’t appear as if Oldham Athletic AFC currently offer fans the chance to undertake a stadium tour of Boundary Park.

How to buy Oldham Athletic Tickets

You can purchase tickets to see Oldham play at home in the expected ways such as phone (0161 785 5150), email ([email protected]), in person at the club’s ticket office/store and  most popularly Online from Oldham’s E-ticketing page.

How to get to Boundary Park

Where is Boundary Park?

Boundary Park is located in the Greater Manchester town of Oldham, approximately 7 miles North-East of the famous city’s centre.

The ground’s name is derived from the fact that it separates the town of Royton and Chadderton, hence its the boundary between the two.

Boundary Park stadium’s address for satnav is as follows:

At the stadium Oldham Athletic offer fans the chance to park at their site for a price of £5 per car and £15 per coach. This is a modest sized car park so make sure that you get there early to ensure you get a space.

As a suburb of Manchester there isn’t a massive train station within the centre of town, with the area served by a series of small regional stations. Mills Hill (Manchester) is the closest to Boundary Park at an approximate distance just over 2 miles which will take around 45 minutes by foot.

The closest hotels to Boundary Park are both located just off the A627 (M) and are the Premier Inn Oldham Central and The Travelodge Hotel (Chadderton).

The Premier Inn is undoubtedly the closer of the two with other options back towards the centre of town, although the Premier Inn has the advantage of being closer to Mills Hill Train station.

Who plays at Boundary Park?

What is the capacity of Boundary Park?

As of 2023 Boundary Park has an official seating capacity of 13,513 for Football matches.

When was Boundary Park opened?

What is the postcode for Boundary Park?

The postcode for Boundary Park is OL1 2PA.

Covid Restrictions may be in place when you visit Boundary Park in 2023. Please visit the official website of Oldham Athletic for full information on changes due to the Coronavirus.