Gigg Lane or The Energy Check Stadium for sponsorship reasons, is a purpose built football stadium located in the Greater Manchester town of Bury. Home to Bury F.C since opening way back in 1885, the football ground has a current capacity of 11,840.

Below is a seating plan of Bury's Gigg Lane: 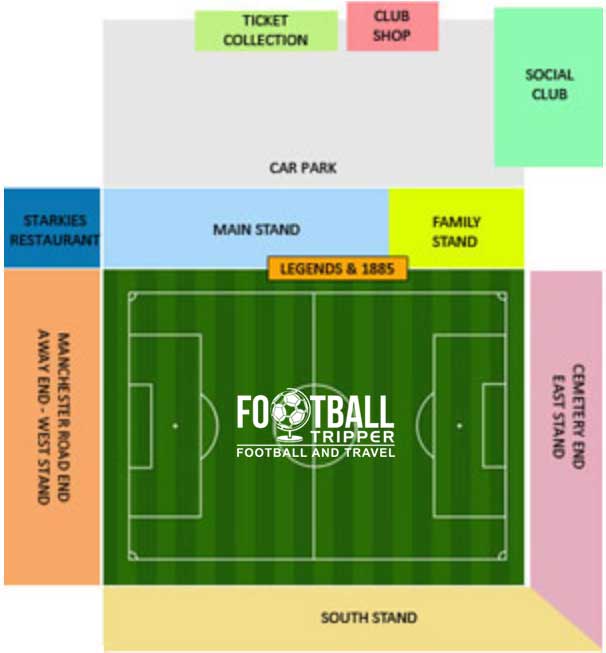 The four stands at Gigg Lane are as follows: Main Stand (North) where the clubs facilities are based, Cemetery End (East) former terrace, Les Hart Stand (South) which is the largest by capacity and Manchester Road End (West) which is where the away fans are housed.

The travelling contingent are housed within the Manchester Road Stand which is a goal-end, all-seater stand which usually has an allocation of around 2,000 tickets per match.

Located slightly below pitch level and perhaps slightly further back from the goal than one would hope, the Manchester Road End doesn’t give fans the best vantage points of the action, however this is somewhat offset by the fact that most away fans choose to stand for the 90 minutes.

We’ve already mentioned the support pillars previously, so won’t go on about them, although if you’re a fan of a lower league football team then you’re probably more than use to them by now.

Note: It is currently known as the Ratio Law Stand for sponsorship reasons.

At Gigg Lane there is the Bury FC Social Club which is open on matchdays for both the home and visiting sets of supporters. Costing just £1.00 to get in and located behind the main stand next to the car park, the pub is a decent sized open space which is perfect to grab a prematch pint from.

Outside the ground along Manchester Road approximately 10 minutes away there is The Swan & Cemetery which is a Thwaites run pub and the Rose and Crown which is slightly smaller but certainly not lacking in the ale department.

Back within the centre of town there is a reliable Wetherspoons on Hayemarket Street called “Art Picture House”, and on route there is the Staff of Life pub which is pretty close to Gigg Lane, making it suitably busy on match days.

At the ground there are “catering” options within each of the four stands in addition to the usual burger vans scattered throughout around the outside of the stadium. The range of food is what you’d expect to find with the likes of burgers, hot dogs and pies costing you around the £3.00 mark.

Bury’s official club store is located at Gigg Lane and is known as the Shakers Superstore.

There is also the official online store which is worth visiting if you want to check out the merchandise in advance or simply can’t make it to the shop during usual opening hours.

It’s worth knowing as well that the shop will always open for 30 minutes after the full time whistle regardless which day of the week it is.

It doesn’t appear as if Bury FC currently offer fans the chance to undertake a stadium tour of Gigg Lane. If this changes, we’ll be sure to update this section.

How to buy Bury Tickets

How to get to Gigg Lane

Where is Gigg Lane?

Bury’s Stadium is located approximately 1.3 miles south of Bury city centre and according to the official website it holds the distinction of being the only stadium in England to be accessible via one road – Gigg Lane, the name of the stadium,

Bury’s stadium has the following address for satnav:

Parking at the JD Stadium is parsimonious to say the least: there is a small car park of 40 places located at Fishpool Liberal Club on Woodley Street, and the main club car park which is reserved exclusively for players, members of staff and guests of the club.

As a result all Bury FC recommend is getting there early and using the local street parking around the stadium where possible.

Bury doesn’t have it’s own railway station with the closest options being Manchester Piccadilly and Manchester Victoria, both of which are approximately 8.5 mile south.

Instead there is the Metrolink Tram system which serves the area of Greater Manchester and connects Bury to it’s larger neighbouring city of Manchester. From the Metrolink station known as the Bury Interchange, Gigg Lane is exactly 1 mile away which will take you around 15 – 20 minutes by foot.

As Gigg lane is built out of town in a primarily residential area there aren’t any bespoke built hotels nearby, with the closest hotels all located on the Manchester A56 road which leads back towards Bury Town Centre.

The Premier Inn next to the Metrolink station and Council building is probably in the best location, with the Old White Lion Guesthouse on the other side of town probably second pick amongst an otherwise drab range of options.

Who plays at Gigg Lane?

English side Bury play their home matches at Gigg Lane.

What is the capacity of Gigg Lane?

As of 2023 Gigg Lane has an official seating capacity of 11,840 for Football matches.

When was Gigg Lane opened?

Gigg Lane officially opened in 1885 and is home to Bury

What is the postcode for Gigg Lane?

The postcode for Gigg Lane is BL9 9HR.

Covid Restrictions may be in place when you visit Gigg Lane in 2023. Please visit the official website of Bury for full information on changes due to the Coronavirus.