Spotland Stadium known by fans as simply Spotland is a multi-purpose sports venue located in the Rochdale area of Greater Manchester.

Rochdale F.C. have played their home fixtures at Spotland as far back as 1920 when it was originally constructed for their own use.

Since opening solely as a football stadium, it has transformed into a multi-purpose arena of sorts, with the council now owning part of Spotland Stadium, as does Rochdale Hornets Rugby League club.

The record attendance for a football match was set just after the Second World War when 24,231 fans came to Spotland to see Rochdale take on Notts County in December 1949.

With the current capacity of the ground set at just under half this at 10,249 you can see that the size of Rochdale hasn’t really grown in the latter half of the 20th century.

After the three high-profile stadium disasters in the 1980s: Bradford City Fire, Heysel and Hillsborough, the following decade saw an increased emphasis on spectator safety.

Spearheaded by Lord Taylor’s report in 1990 which mandated that all top-flight clubs had to convert terracing to seats, the capacity of Spotland was significantly reduced.

Fortunately the legislation was relaxed in 1999 for lower division teams, and thus the ground today retains a small section of terracing in the Sandly Lane End.

The most recent renovations at Spotland occurred in anticipation of the 2013 Rugby League World Cup, where the ground hosted a match between Fiji and Ireland. It is currently known as Crown Oil Arena for sponsorship reasons.

Below is a seating plan of Rochdale's Crown Oil Arena: 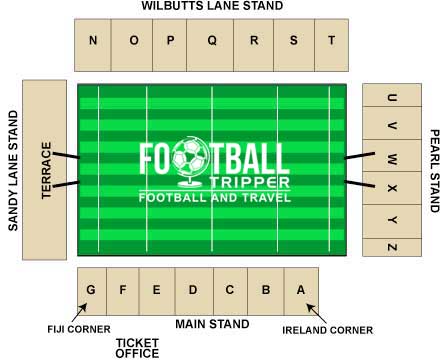 Travelling fans who visit Spotland Stadium share the Willbutts Lane Stand with the home supporters, with the standard allocation of around 1,500 issued towards the Sandy Lane End to the West.

If the occasion demands it, Rochdale can allow the away fans to occupy the entirety of the Willbutts Lane Stand stand, which results in a maximum capacity of 3,650.

Rochdale’s ground can appear to look rather plain, and not in possession of the most modern facilities but this is countered by the decent match day atmosphere, friendly home supporters and relaxed stewarding.

The stands may not be the largest, but the low roofs help to contain the noise, and the Willbutts Lane stand also has the benefit of avoiding the use of support beams. This allows away fans unrestricted views, which is important as the allocation is practically tucked in the corner.

At the stadium there are the Ratcliffe and Studds Bars which are open to both sets of fans on matchdays with both bars opening from around 12.00 pm on Saturdays and 5.00 pm during midweek matches.

These are both located either side of the ground on Sandy Lane B6452.

From Rochdale railway station the centre of town is less than 10 minutes away and here you will find a handful of smaller drinking establishments such as The Cask & Feather real ale pub.

There is also Yate’s and Wetherspoons pubs, with the latter known as The Regal Moon, located outside of Rochdale Interchange Tram Station.

Around Spotland Stadium chips are very much on the menu with the popular Wilbutts Lane Chippy located to the north of the stadium, as well as the Fortune City Fish & Chip located further south just off of Sandy Lane, past the Ratcliffe Bar.

Within Rochdale itself there are numerous independently run fast food restaurants which cover a range of popular cuisines, although this may not be practical to all visitors.

In which case, stick to bringing your own sandwiches or grabbing a bite to eat at Spotlands itself where the usual fayre greets you.

Rochdale operate a club shop at Spotland in addition to their own official online site, Rochdale AFC Club Shop.

It doesn’t appear as if Rochdale AFC currently offer fans the chance to undertake a stadium tour of Spotland Stadium.

How to buy Rochdale Tickets

How to get to Crown Oil Arena

Where is Crown Oil Arena?

Spotlands Stadium is located in the town of Rochdale which is just under 10 miles north-east of the city of Manchester, metropolitan country of area of Greater Manchester.

Spotlands’ car park is reserved for guests of the club and staff only which means it is off limits to the general public.

The club advises people that some Street Parking is available around the ground but asks fans to double check for parking signs/meters as these areas are monitored by traffic control.

Parking spaces can also be found at Oulderhill Community School which is less than half a mile from the stadium and a 10 minute walk.

The full address is:  Oulderhill Community School, Greave Avenue, Rochdale, Lancashire, OL11 5EF and it will cost you a few quid to park you car here during the match.

Rochdale Train Station is located 1.8 miles south of Spotlands within the centre of town with a walking time of anywhere between 30-40 minutes.

Rochdale railway station is served by trains from Manchester Victoria and Leeds which gives travelling fans two decent routes to travel from throughout the country.

Taxis are usually available outside the station for a cost of around £7.00 – 8.00

One of the closest and highest rated hotels is the Cemetery Hotel which is is located on  the B6452 on Sandy lane less than 10 minutes walk of the stadium.

Back towards Rochdale city centre the Best Western Broadfield  and Flying Horse Hotel act as decent half way points, with the Nelson Hotel located closest to the railway station.

Who plays at Crown Oil Arena?

What is the capacity of Crown Oil Arena?

As of 2023 Crown Oil Arena has an official seating capacity of 10,000 for Football matches.

When was Crown Oil Arena opened?

What is the postcode for Crown Oil Arena?

The postcode for Crown Oil Arena is OL11 5DS.

Covid Restrictions may be in place when you visit Crown Oil Arena in 2023. Please visit the official website of Rochdale for full information on changes due to the Coronavirus.