County Ground is a purpose built football stadium located in the south-west city of Swindon.

Owned by the local council dating back to 1896, the ground is used predominantly for the home matches of Swindon Town F.C who currently ply their trade in League One.

The plot of land on which today’s County Ground sits has been home to Swindon Town since 1896, with a local brewery donating £300 in order for the club to construct the first stand. A pivotal moment in the club’s history, even to this day Swindon have named a stand in honour of Thomas Arkell, who owned the Arkell Brewery.

The history of Swindon’s ground has mostly been one of periodic development, with the club able to invest in new facilities as and when they had the requisite money.

It wasn’t until 1932 that the first covered stand was erected for example, and even the roof which covered the Town End Terrace in 1938 was funded by donations from the Supporters Club.

During the Second World War, the ground was commandeered by the Army and used to house Prisoners of War. Receiving compensation of £4,570, this partially helped the club fund ground-breaking floodlights in 1951.

Although Fratton Park was the first ground to host a flood-lit league match, The Country Ground hosted a friendly match before against Bristol City on 2nd April 1951.

In the wake of the Hillsborough disaster, and the publication of the Taylor Report, County Ground was converted to all-seater in the 1990s.

This process saw the addition of the new Don Rogers Stand in 1994, and later the replacement of the terrace on the Shrivenham Road, resulting in the stadium’s current capacity of 15,728.

Constructed on land owned by Swindon Borough Council who Swindon pay rent to, the club have long harboured ambitions of building their own stadium.

However, after being relegated to League Two at the end of the 2010-2011 season, it would appear as if the club are content to stay at Country Ground, and are now planning to upgrade the facilities to a modern 19,000 capacity arena.

Below is a seating plan of Swindon Town's The Energy Check County Ground: 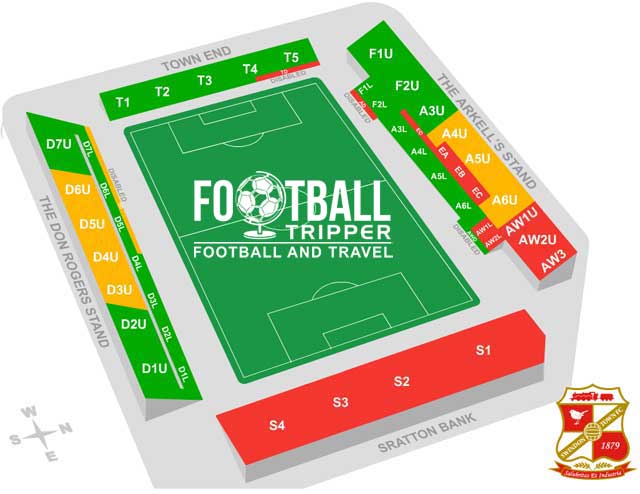 Visiting supporters who make the trip to Swindon are usually housed within the Arkells Stand which is one of the oldest parts of the ground.

Running for the length of the pitch on the side where the dug-outs are located, the Arkells Stand is shared with some home supporters and the default allocation is set at around 1,200 towards the east-side.

The east-side is actually an uncovered stand known as the Stratton Bank End, and is sometimes allocated to the away fans for the larger matches as it is capable of hosting up to 2,100 fans.

Formerly a terrace, impromptu seats have been bolted on in a two-tier arrangement, and the lack of roof makes this part of the ground extremely unpopular during the colder winter months.

Naturally, the older Arkells Stand is more favourable with both sets of supporters, and although the facilities are noticeably more archaic inside the concourse, many would take a roof over a newer fast-food kiosk any day of the week.

Looking out onto the pitch, some views may be partially restricted by the two-support beams but due to the placement of the away seats, you should have a seamless view of the action.

The closest pubs to County Ground are The Tap & Barrel and The County Ground Hotel, although the latter only permits home fans on matchdays which makes it inconvenient for those sporting prominent colours.

Thankfully The Merlin 10 minutes south of the magic roundabout is more than adequate with over a dozen television screens, and fine ales on tap.

If you are traveling in from Swindon city centre where the train station is located then you have a good number of choices ranging from the GW Bar and Grill to a large JD Wetherspoon pub, as well as a Yates, and Holiday Inn Express.

At the stadium itself there is a dedicated place to drink for away fans known as Bar 71 although there has often been complaints that it is too small, and it overcrowds quickly.

This is why some fans prefer to make their way to the Swindon Cricket Club instead which lies north of the ground. Only open for weekend 3pm matches, it is cheap and friendly also with onsite parking available for a small fee.

South of The County Ground just off of the magic roundabout is a Burger King and the Frying Fish Chip Shop which may appeal to some fans.

Unless you’re travelling from that direction however the locations aren’t the most convenient with more options available for those who travel from the train station.

By making the journey through the centre of the city you will pass numerous independently run outlets, with established chains such as Greggs, Tesco and Costa all congregated towards the west of the station.

Otherwise, your food options the expected matchday items such as hot dogs and sausage rolls available at Swindon’s ground.

Swindon FC operate a club shop at their stadium in addition to their own official online site, STFC Direct. The opening times for the store at the ground are as follows:

For more information, to check opening hours or to see if the latest sportswear is released yet feel free to send an email to [email protected] or phone the store on 0871 876 1993.

It doesn’t appear as if Swindon Town FC currently offer fans the chance to undertake a stadium tour of County Ground.

How to buy Swindon Town Tickets

Tickets to see the Robins play at the County Ground can be purchased via telephone (0871 876 1993), in person at the STFC Store/ticket office in the weeks leading up to the match and most popularly from Swindon FC E-Ticketing.

Prices are listed below with the club announcing the category of each match well in advance of the fixture:

How to get to The Energy Check County Ground

Where is The Energy Check County Ground?

County Ground’s address for satnav is as follows:

Parking for both sets of supporters is available within the stadium complex and is priced at the slightly expensive price of £10.00.

With 12 allocated disabled bays you could infer from this that the car park is quite small but it’s impossible to say as the club haven’t stated the total size on their website.

Another option is to park at St Joseph’s College situated behind the ground just off of Ocotal Way. Costing just £5 albeit with a slightly longer walk, I suspect this might be popular with some fans purely based on principle.

Swindon train station is located approximately 0.8 miles west of The County ground which will take the average fan less than 15 minutes or so to walk.

Once you have exited the station turn left onto Station Road and follow this in parallel to the train tracks until you reach the roundabout.

Turn right down Country Road and follow this down until you see the stadium on your left hand side.

The aptly named County Ground Hotel is the closest hotel to Swindon’s stadium with the compact nature of the city centre not really allowing any hotels location wise to stand out.

The Holiday Inn Express and The Great Western Hotel are undoubtedly close to the train station with the Jurys Inn Swindon and Travelodge much more central.

Who plays at The Energy Check County Ground?

What is the capacity of The Energy Check County Ground?

As of 2023 The Energy Check County Ground has an official seating capacity of 15,728 for Football matches.

When was The Energy Check County Ground opened?

What is the postcode for The Energy Check County Ground?

The postcode for The Energy Check County Ground is SN1 2ED.

Covid Restrictions may be in place when you visit The Energy Check County Ground in 2023. Please visit the official website of Swindon Town for full information on changes due to the Coronavirus.